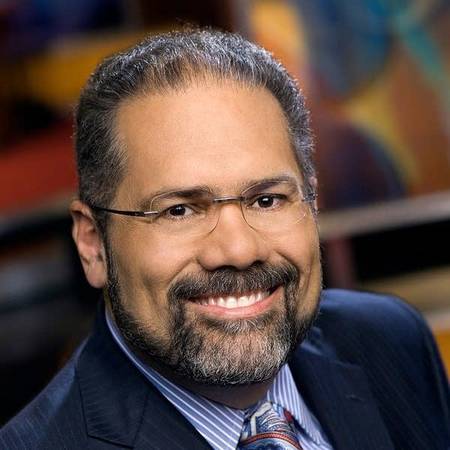 Ray Suarez is an American broadcast journalist, correspondent, and a radio host. He also works as the John J. Mccloy Visiting Professor of American Studies at Amherst College. Besides, he also hosted Inside Story on Al Jazeera America till the network ceased operation in 2016. Apart, Ray joined PBS News Hour in 1999 and was a senior correspondent for the evening news program till 2013. Suarez is an international news host for America Abroad form Public Radio International.

The former PBS NewsHour host, Ray Suarez was born as Rafael Suarez Jr. on March 5, 1957, in Brooklyn, New York, USA. He grew up and raised in Brooklyn by Puerto Rican parents. Moreover, Suarez attended public school, John Dewey High School from kindergarten through 12th grade, graduating in 1974. However, he completed his bachelor's degree with arts in African History from New York University. Later, he obtained a master's degree in social sciences from the University of Chicago.

Well, Ray,63, is a married man. He is married to his love life turned wife, Carole Suarez. However, he is a very secretive nature person and always keeps his personal life far away from the media and the public. Besides, he and his wife share a strong bond and understanding between each other.

Apart, the duo also shared three lovely children from their long marital life. They are Rafael Suarez(son), Eva Suarez(daughter), and Isabel Suarez(daughter). But, Ray hasn't revealed his children's date of birth yet to the public. There is no doubt that his children are grown up and busy in their respective fields.

On the other hand, he is a career-focused person and loves his work more than anything. As of now, he is very living a happy parenthood life with his wife and three children in Washington D.C.

American broadcast journalist, Ray has amassed a decent amount from his career. However, his exact net worth figure is yet under review. Furthermore, he has an estimated net worth of $1 million which is similar to Bethany Davis and Mark Schanowski.

On the other hand, the average salary of broadcast journalist ranges from $52,144 per year. Besides, he also a visiting professor at University which might him extra money to uplift his income. He is currently a healthy life with his wife and three with a decent amount of money.

The veteran journalist and correspondent, Ray joined Talk of the Nation host in 1993 at National Public Radio Program. Back in 1999, he left the talk show and joined PBS NewsHour. Moreover, he worked as a senior correspondent for the evening news program. Besides, he also served on the PBS television till 2013. Moreover, he is a famous host for America Abroad form Public Radio International.

Apart from journalism, he is also authors of the book. He has published three books to date. While proceeding his career, he also worked as a radio reporter in London and Rome, as a Los Angeles correspondent for CNN. He also worked in WMAQ-TV in Chicago. As of now, he works as a co-host of the radio program WorldAffairs on KQED.