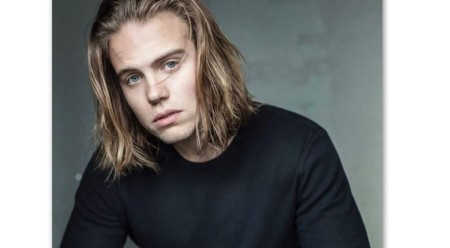 Canadian actor, Reilly Dolman rose to fame after portraying the role of a college buddy in the family fantasy adventure movie, Percy Jackson & the Olympians: The Lightning Thief. He is also best known for his role as Philip Pearson in the sci-fi mystery drama series, Travelers. He frequently appears on the TV shows, including The Terror and The InBetween.

Dolman was born on 29th February 1988, in Vancouver, Canada. He is Canadian by his citizenship and belongs to white ethnicity/race. Apart from all this, he is raising an adorable daughter as a single parent. To know more about Dolman's personal life, read the article to the end.

Is "The Terror" Actor Married?

The 31-year-old actor, Dolman is reportedly unmarried and lives a single life. Despite being a well-known personality, he keeps a distance from the media when it comes to his intimate life.

Reilly is currently busy concentrating on his upcoming filming projects, which might be the best of his acting credits. So, this might be a reason why he is committed to anyone up until now.

The British Columbia-based actor, Dolman is said to have a child from his past affair with a mysterious woman. After the birth of their daughter, the couple's relationship didn't last long due to some personal misunderstandings.

Upon their separation, Dolman is taking the responsibility of their newly-born child. On father's day, he posted a picture of carrying his daughter on his hands while cooking food in the kitchen via Instagram on 16th June 2019. More to that, many of Reilly's fans wished him "Happy Father's Day!" on that day.

Reilly Dolman's net worth is $650 Thousand as of 2020. He earns a decent salary from his professional works. So, his average annual income might be similar to a well-experienced actor in Canada, which is $46,410.

The former cast member of Travelers, Dolman is starring in the historical adventurous drama series, The Terror that garnered 8.0 out of 10 stars from 32,198 ratings. Similar to Dolman, Dustin Milligan frequently appears on many TV shows.

Actively Pursuing the Passion for Acting

As a prolific actor, Dolman started his career from a small role, Brennan in the American sci-fi drama series, Bionic Woman in 2007. He then appeared as Brian in the comedy series, The Troop in 2010.

A year later, Reilly portrayed the role of Jason in the Canadian-American military sci-fi series, Stargate Universe in 2011. He also guests appeared in many TV shows, including Supernatural, Rush, Zodiac: Signs of the Apocalypse, Frontier, and so on.

Take a look at the trailer of Percy Jackson & the Olympians: The Lightning Thief

Dolman also featured in many high-rated movies, including Flicka 2, A Brothers Love, Missed Connections, and various others. Meanwhile, some other Canadian actors like Gavin McInnes are also entertaining the people with their mesmerizing talent.

Take A Look At Married Celeb!!! Where You Can Explore More Amusing Biographies & Articles Of Your Favorite Celebrities