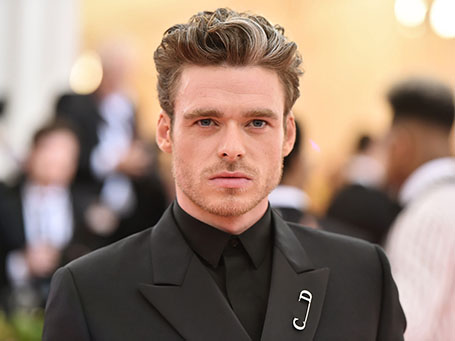 Game of Throne's star Richard Madden is one of Time magazine's 100 most influential people in the world. The actor Richard received Screen International Award for Star of Tomorrow for his role in the Game of Thrones. His upcoming movie The Eternals is set to be released on November 6, 2020.

Richard was born on 18 June 1986 in Elderslie, Renfrewshire, Scotland. His father Richard Madden Sr. worked in the fire service, whereas Richard's mother Pat Madden was a classroom assistant. Richard grew up with two sisters Cara Madden and Lauren Madden.

Who is Richard Madden's Wife?

Richard isn't married till the date but was in a romantic relationship with English actress Jenna Coleman since 2012. Both the couple being film stars, they pulled the media's attention every time. But there came the time when the differences began pulling them in different directions. Richard and Jenna finally separated in 2015.

Eventually, Richard was rumored to be dating British actress Caroline Flack. Shortly afterward, Richard began dating Laura Whitmore. Both of the relationships proved to be a failure.

Richard was said to have dated his on-screen partner Lily James. The two have appeared in several love dramas, including the 2016 theatre show Romeo and Juliet. But they never spilled the truth about their relationship.

Richard's past relationships hint that he won't remain single for a long time. When Richard was asked about his sexuality in 2019 interview with New York Times, he said;

Therefore, Richard might keep his future relationships away from the public's views. Furthermore, he is also not so keen about sharing love life in social media. Although Richard is popular in social sites like Twitter and Instagram, his fans and followers can't take a glimpse into his personal life.

As of now, he is not married, therefore, Madden doesn't have a wife.

What is Richard Madden's Net Worth?

Richard Madden's net worth is estimated to be more than $10 million. Famous for his signature grey streak hair, Richard has appeared in the box office hit movies and commercially successful TV series.

Besides HBO's drama series Game of Thrones and Bodyguard, Richard has appeared in theatre shows like The Winter's Tale, Romeo and Juliet, and Noughts and Crosses.

As an actor for BBC's hit series, Richard might have earned close to $1,97,484 or more in a year. Similarly, as an experienced theatre actor, his salary goes as high as $54,000 in a year.

Read more about British actor Tom Brooke who is also part of Game of Thrones.

At just 33 years of age, Richard has turned himself into a Hollywood megastar. His hard work, dedication, and talent were paid off when he won Golden Globe's Best Performance by an Actor in a TV - Drama Award in 2019 for Bodyguard.

In the same year, he was nominated for Scotland's BAFTA Awards and Broadcast Film Critics Association Awards for the same TV drama.

Richard's recent wins were an honorary award from CinEuphoria for Game of Thrones. Besides, he is the recipient of the 2019 Monte-Carlo TV Festival and National Television Awards.

Richard's upcoming movie The Eternals is based on the comic book by Jack Kirby with the same name. The fantasy film directed by Chloe Zhao is produced by Marvel Studios. The story revolves around an alien race of Celestials who have resided on earth secretly for more than 7000 years.

Alexander Siddig is another actor who is best known for his roles in science-fiction movies.

Click Married Celeb to read more about your favorite celebrities!!!