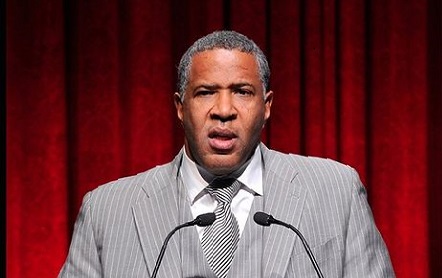 Who is Robert F. Smith?

Do you know who the 163rd richest person in American and 480 richest person all over the world is? He is none other than Robert F. Smith. Well, he is an American businessman, investor, and as well as philanthropist. Also, Smith is the founder, chairman, and the CEO of private equity firm Vista Equity Partners.

Robert F. Smith was born on 1st December 1962 as Robert Frederick Smith in Denver, Colorado in the United States. Further, he was born to the parents  Dr.William Robert Smith (father) and Dr.Sylvia Myma Smith (mother). He holds American citizenship and belongs to African-American ethnicity.

Concerning his education, Robert attended Carson Elementary School and East High School in Denver. Then he attended Cornell University. At Cornell, he became a brother of Alpha Phi Alpha. He also joined Columbia Business school where F. got his MBA in finance and marketing.

A former Goldman Sachs investment banker, a Smith, founded a private equity and venture capital firm, Vist Equity Partners in 2000. Currently, he has overseers 40 software companies and has more than 60,000 workers. Also, he owns a $46 million in cumulative capital commitments as of 2019. Today it manages more than $30 billion in assets and is touted as a fourth-largest enterprise software company, posting annual realized returns of 31%(including exits) since it was founded.

Besides, Smith F. Smith is also renowned philanthropy. Last year, he signed the Giving Pledge, the first black American to do so, and engaged in contributing to philanthropic causes at least half of his net worth.

What is Robert F. Smith's Net Worth?

As per Forbes, Robert F. Smith's Net Worth is estimated at $5 Billion as of 2019, making him the nation's richest African-American. Well, he is the first self-made Wall Street billionaire. In 2015, Vista Equity Partners regularly boasted an annual return of 30 percent from their investments. For the first time, he made the Forbes 400 with a net worth of $2.5 billion, ranking him No. 269 on the list of richest Americans, as well as the second-richest African-American.

In 2018, when Forbes estimated his net worth at $4.4 billion, Smith nudged Oprah out of the top place and named him the wealthiest African American nation. It also manages over $30 billion in assets and is recognized as one of the best-performing private equity firms, posting 31 percent (including exits) annual realized yields since it was founded.

A former Goldman Sachs investment banker is the buyer of a $59 million three-story penthouse in New York, as per Wall Street Journal. In 2016, Robert and his wife Hope owned a $20 million Malibu mansion from Real Housewives of Beverly Hills star Yolanda Hadid. The house consists of 11,622-square-foot and another reality TV star, Kylie Jenner, is presently renting the home.

And in 2018, Robert F. purchased $59 million penthouse million in the Chelsea neighborhood of Manhattan. The apartment covers two floors has 10,000 square feet of living space, including six bedrooms, seven bathrooms, and a private rooftop terrace with a pool.

Currently, Smith and his family live in Austin, Texas.

Likewise, Smith donated $20 million to the National Museum of African American History and Culture in the year 2016. He also partnered with the Fund II Foundation (of which he president) on a $50 million engagement to Cornell University to help boost the representation of women and minorities at its engineering school.

Robert has donated $1.6 Million to the Democratic National Committee as per Open Secrets. He also donated $5,000 to Republican Mitt Romney, as per research group.

Who is Robert F. Smith Married to?

Robert F. Smith has been married twice in his life. He is now married to his second wife, Hope Dworaczyk, a former Playboy playmate, fashion editor, advocate. They tied the wedding knot on 25 July 2015.

The wedding was a lavish ceremony on Italy's Amalfi Coast. They rented the Villa Cimbrone Hotel and put on a star-studded display with Seal, John Legend and Bryan McKnight entertainment.

From their nuptial relationship, the couple has two children, Hendrix Robert Smith (born on December 19, 2014) and Legend Robert Smith (born on March 16, 2016). And three other kids, Zoe Smith, Eliana Smith and Max Smith from a previous marriage of Smith. He was previously married to fellow Cornell alum Suzanne McFayden Smith in 1988. But after 22 years of marital relationship, they finally divorced in 2014.