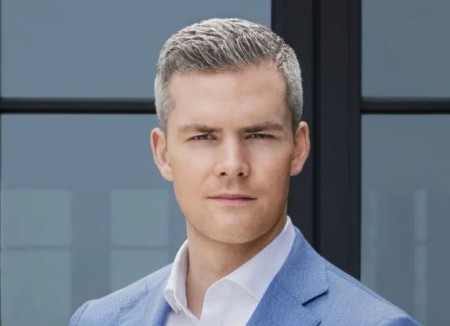 Ryan Serhant is a charming individual who has made a name for himself in the real estate world. Over the past 11 years, he is known as a reality tv star and a real estate broker. With a net worth of $20 million, Serhant owns a real estate firm in New York. Also, he appeared in the two-time Emmy nominated reality show, 'Million Dollar Listing New York.'

Serhant is an author of a best-selling book, 'Sell It Like Serhant, ' which he debuted in September 2018. At 35, Ryan has achieved a lot through his profession. Besides, he has a daughter from his lawyer wife, Emilia Bechrakis. Want to know more? Then stay with us!

The Million Dollar Listing star, Ryan Serhant, is married to Emilia Bechrakis. She was a lawyer by profession who comes from a Greek family. The pair married on July 7, 2016, in Corfu, Greece, in a Greek church. For the weddings, Ryan converted to the Greek Orthodox Church. Their marriage ceremony was aired n Bravo TV as well.

So, how did they meet? The couple first met at a Greek Jewish Party in New York. Upon their first meeting, Emilia thought Ryan was either gay or married because he was too good looking to be single. Ryan, as a confident, witty, and charming individual, easily wooed her, and the couple began dating.

Sealed down Times Square Garden to propose his wife

Ryan decided to propose Emilia in a sweetest manner anyone can imagine. He ceased off Times Square Garden for an hour to propose his love on September 14, 2014. How he managed to do so? Well, the real estate player got the help from the city's Mayor and 50 NYPD officers.

Ryan's proposal took Emilia by surprise, and her happiness doubled when he gave a beautiful custom-made cut ring. The couple shared their joy through their social media.

Their love story was like a fairy tale, and still, their romance is heavenly even after marriage. Ryan and his wife Emilia welcomed their first baby daughter, Zena Serhant, on February 26, 2019. After three years of trying to start their family, the pair finally became parents.

However, the couple faced serious issues with expanding their family. Ryan and Emilia conceived a baby via In Vitro Fertilization (IVF). The husband-wife duo revealed their journey of having a baby through a YouTube series.

How much is Ryan Serhant's Net Worth?

The real estate mogul, producer, and actor, Ryan Serhant, has a  net worth of $20 million as of 2020. He is the owner of the top-ranked real estate firm, The Serhant Team. Ryan's sales team is among the top five teams across the nation.

They sold and closed a staggering $838 million worth of real estate in 2017. Ryan is the owner of an entertainment and media company, Serhant Media Group (SMG). So, how he became a real estate mogul at such a young age?

Watch a sneak peek of Sell It Like Serhant!

Well, Serhant's success comes from his ability to identify people's strengths and weaknesses. Before his career as a broker, Ryan tried his luck at acting and modeling as well. At present, the millionaire businessman also runs merchandise through his website. Just for information, a renowned real estate broker, David Haffenreffer, also has a decent net worth.

Inside of Ryan Serhant House

The intelligent broker owns some of the lavish condos in New York City and other areas. He bought a luxurious 7,670-square-foot Brooklyn townhouse while filming the last season of Million Dollar Listing New York. As per BravoTV, Ryan paid off $7.6 million for the 12-foot ceiling house.

An online source revealed that Ryan was going to purchase a $3.37 million house in October 2019.

Not only on television, but Ryan is also equally popular on social media as well. His self-titled YouTube channel has over 780k subscribers as of February 17, 2020.

To know more about your favorite celebrities, follow marriedceleb.com!