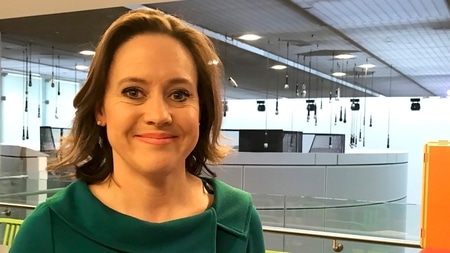 Sally Bundock and Paul Bundock proved the definition of love for eternity. The couple remained together until mid-2017 when Paul took his last breath.

Bundock then became very strong for her children as it is difficult for the kids to understand. Now in 2019, after two years of the death of her husband, has she moved on? Well, let's explore more about her marital life and her personal life.

Her Married Life with Paul

The British journalist is a prominent face at the BBC headquarters. Just like Mickey Clark at BBC, she also delivers financial news for the European and International viewers of the network.

As much as people knew about her professional life, her marital life with Paul remained intact from the audience. She met Paul in the late 80s, but any further information about their first meeting is a secret. After dating for some years, the pair took their romance to the next step by deciding to get married in 1999.

For the big day, the pair booked an exciting venue at Market Harborough, UK. They exchanged wedding vows with each other in front of their close friends and loved ones. Any further details about their wedding ceremony are kept private by the duo.

The English journalist became proud parents of three children. Neither Sally nor Paul disclosed any information about their kids. Scrolling through Bundock's social media, we can rarely spot the pictures of their three sons together.

Now, after the death of her husband, Sally has taken the responsibility to raise her kids. Being a single mother, she is setting an example for many women on how to correctly maintain a work-life balance.

Sally co-hosts the morning show on BBC alongside Ben Thompson. In April 2018, Thompson walked out live on air, leaving his co-host to finish off the show alone. Louise joined the hosts to discuss on Elon Musk's views on unproductive meetings.

As they were discussing, Ben stood up and said,

And then he walked out, leaving Sally to end the show awkwardly all by herself. She is a financial journalist at BBC after joining the network in 2000.

Before joining the big fish in the network, she previously worked at Bloomberg. Just like Sally, former CNBC journalist Mary Thompson also served at Bloomberg. In her long career, Bundock went to the spot to cover events like World Economic Forums, G7 Conferences, and EU Summits, to name a few.

In the mid-2017, the Bundock family suffered from the tragic loss of the figurehead in the brood. Paul had a unique Cancer called Carcinoid Tumors, which also took the life of Apple mogul Steve Jobs.

To cure him, the doctors had to cut off the tumor. It didn't work because of widespread cancer in Paul's body. Sally prepared her three sons before the tragic events by openly discussing their father's condition.

On July 2, 2017, she tweeted about the bereavement in the family and that she would be taking a break for a while. Now, every year on World's Cancer Day, Sally donates her hair to Cancer Patients. As of now, Bundock is living with her children with a relationship status tuned to Single.

Who is The Father of Alexis Green's Baby? Her Relationship Status