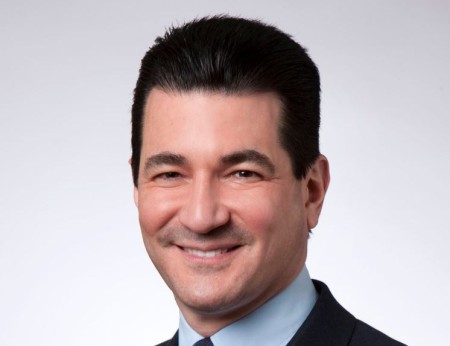 Scott Gottlieb, M.D, is an American physician who worked as the 23rd Commissioner of the Food and Drug Administration (FDA). He served in the FDA from May 2017 until April 2019. Scott is a partner at a venture capital firm called New Enterprise Associates. Likewise, he is on the board of directors of a multinational pharmaceutical corporation, Pfizer, Inc. Besides, Scott is involved in several ventures as well.

Gottlieb was born on June 11, 1972, in New Jersey, the United States to parents, Dr. Stanley (father), and Marsha Gottlieb (mother). The 48-year-old Scott belongs to Jewish ethnicity. He earned a Bachelor's degree in economics from Wesleyan University. Likewise, Gottlieb completed his residency in internal medicine at Mount Sinai Hospital.

The CNBC contributor, Scott Gottlieb, is married to Allyson Brooke Nemeroff. The couple exchanged their wedding vows on June 12, 2004. Further, their marriage ceremony took place at the Women's National Republican Club in Manhattan. Scott and his wife, Allyson, have been together for over 16 years as of now. They share three children, 10-year-old twins, and a 6-year-old daughter.

Talking about Gottlieb's wife, Allyson is the daughter of Dr. Ronald M. Nemeroff and Helaine Nemeroff. She has worked as a committee chair for the Temple Israel of Westport, Connecticut. Currently, Allyson is one of the Board of Trustees in the same organization.

Previously, Scott's wife worked in Washington and Manhattan as the national advertising director for The New York Sun. She graduated from the University of Pennsylvania. Currently, Gottlieb and his family reside in Westport.

As per some sources, Scott Gottlieb has a net worth of $370,000 as of 2020. As per an article published in the New York Times, several companies and investment firms paid Scott millions of dollars over the years. Likewise, he received over $150,000 to advise Vertex Pharmaceuticals from 2013-2015. Another physician who has a decent net worth is Mor Shapiro.

Scott owns over 1000 unites of Pfizer stock worth over $140,840. Further, he earns $231,621 as an independent director at Pfizer. As per Gottlieb's financial disclosures published by The Wall Street Journal, Scott received around $90,000 in fees in 2016 as a Glaxo consultant. Apart from his profession, Gottlieb is involved in other professions as well. He was a staff writer for the British Medical Journal. Additionally, Scott appears regularly on CNBC.

The same documents showed that Scott made more than $3 million during 2016. However, his earnings included $1.85 million from T.R. Winston, a merchant bank, and $280,000 for consulting New Enterprise. Moreover, Scott is the chief executive of Cell Biotherapy, an early-stage cancer biotech firm.

Gottlieb first joined the FDA as a senior advisor in 2002. After working for one year, Scott later returned to FDA in 2005. For two years, he worked as the agency's Deputy Commissioner for Medical and Scientific Affairs.

In March 2017, Scott was nominated as FDA Commissioner and began working in the office from May 11, 2017. During his time as commissioner, Scott advocated against the use of nicotine. He also delayed application deadlines on cigars and electronic cigarettes.

After two years, Gottlieb announced his resignation as FDA Commissioner in March 2019. He decided to leave the position so that he could spend more time with his family.

As a resident of Connecticut, the former FDA commissioner, Gottlieb warned his locals about the challenges of corona-virus. He also said that there could be potential interruptions during the school year due to the virus.

As per sources, over 613,000 Connecticut residents have been tested since the pandemic began. The same sources claimed that over 47,000 positive cases appeared while 4,389 cases resulted in fatalities.