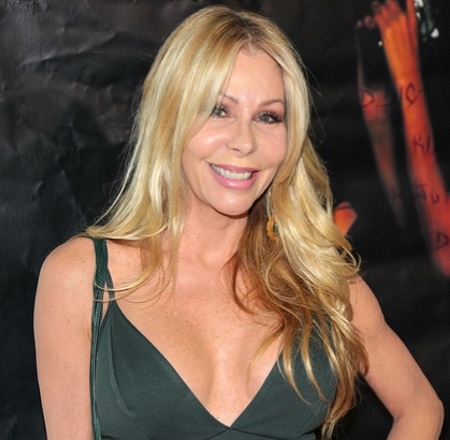 Sharise Ruddell is an American successful fashion designer and reality TV star who starred in Canadian Slice's reality television series Ex-Wives of Rock. In addition to her own career, she gained huge fame when she got married to an American musician, Vine Neil as a second wife.

She was born on 27 October 1964 in Huntington Beach, California, USA to the parents, Gary Ruddell and Shirley Ruddell. Further, she has three siblings named Gary Lee Ruddell, Greg Ruddell, and Shanae Ruddell. She holds American citizenship whereas her ethnicity is not known.

Talking about now, Sharise who attended the Whittier Christian High School in La Habra, California is now living her single life. In fact, she keeps most of her personal stuff under wraps.

But previously, Ruddell was happily married to her former husband, Vince Neil, now 59 years. She first met her future partner in Vince's house as a guest when he used to invite female mud wrestlers to party.

After a few years of romance, exchanged wedding vows on April 30, 1987, in a private ceremony. During their marital relationship, they had one daughter Skylar Lynnae born on March 26, 1991. But their baby girl Skylar died of stomach cancer on August 15, 1995, at the age of 4.

Things suddenly went worse between them. And Sharise, the 1.63 m tall filed for divorce from Neil in 1993. However, there is no specifies reason behind their separation on the media. Besides it, she has one son named Colt Siegel born in 2002 with her relationship with Kirk Seigel. Bit they also ended their union.

The lead vocalist of heavy metal band Neil initially dated his first girlfriend, Tami whose last name is still unknown. They even had one son Neil Jason Wharton, born on October 3, 1978.

Then Vincent Neil tied the knot with his first wife, Beth Lynn in 1981. On October 29, 1983, they welcomed one daughter named Elizabeth Ashley Wharton. They announced their separation in 1985. Then he married Sharise from 1987 to 1993.

Then he met an actress and Playboy Playmate, Heidi Mark, 49.  The two started dating in early 1993 after a blind date by Mark's one makeup artist. On 28 May 2000, they were married after a few years of romance. But within 15 months, they ended their marriage on 29 August 2001.

In January 2005, the American musician then got hitched with his fourth wife, Lia Gherardini, aged 52. But also in 2010, they had separated in 2010 after being together for five years.

Net Worth and Earnings of Sharise Ruddell

As of 2020, Sharise's overall net worth is estimated to be over $500 thousand. The primary source of her income is her professional career as a  reality TV star, fashion model, and a mud wrestler at the Hollywood Tropicana club.

In addition, she has received a high cost by engaging in crafted high-profile stage costumes, jackets, Magazine covers, such as Rolling Stone. In the 90s, she modeled a line of swimsuits called Exposed, bridge-marketed with Neil's solo album. She also won fashion companies like NA-NA and Pink Polka Dot.

On the other hand, her divorced husband, Vince Neil, an American rock star has a net worth of $50 million as of 2020. He has amassed his total amount throughout his career as a ѕіngеr аnd а ѕоngwrіtеr.

In addition, Neil also has a wide range of buѕіnеѕѕ vеnturеѕ such as wіnеmаkіng buѕіnеѕѕ, tattoos shops, and clothing lines, among others.  He also owns a luxurious house in Las Vegas, Nevada, which was featured on "MTV Cribs."