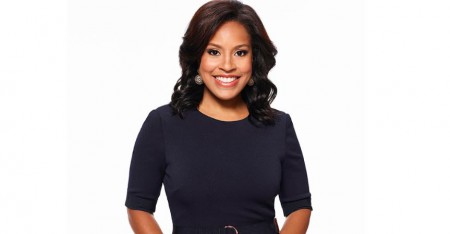 The following column aims to provide an insight into the 41-year-old, Sheinelle Jones, who works as the co-anchor of the Today's weekend edition. Also, she is the co-host of the third hour of Today weekends. Meteorologist, Dylan Dreyer rotates with Jones on Weekend Today and MSNBC on weekends.

Do you know? The Today Show is one of the longest-running American television series whose advertising revenue is over $500 million. The credit of the show's success goes to the dedicated and passionate journalist and anchors. Now, let's know why Sheinelle Jones is famous and what is her marital status.

The former co-host of Emmy Award-winning show, "Good Day Philadelphia," Miss Jones is a married woman. She tied the knot with her college sweetheart, Uche Ojeh, on September 1, 2007. Further, their wedding ceremony was held at Rittenhouse Square in Philadelphia. As of 2019, the husband-wife duo has been married for twelve long years.

So, how did they meet? Well, the two first met at Northwestern University. During that time, she worked as a college tour guide, while Ojeh was a senior in high school. Jones revealed in an interview that upon seeing Uche, she instantly liked him.

There is no doubt that Sheinelle and her spouse are happy with their companionship. Well, looking through her Instagram, it appears that the lovebirds are still in deep love. Despite long marital solidarity, they never miss any chance to show love on social media. On September 2, 2019, she shared an adorable picture of the duo on the occasion of their wedding anniversary.

Sheinelle Jones is a Family Woman

As mentioned, Sheinelle Jones currently works as the co-anchor of Today's weekend edition. Previously, she worked at Fox, WTXF-TV.  She has nearly two decades of professional experience. However, she manages to balance her personal life astoundingly.

Now, talking about her partner, Uche Ojeh is a managing partner at UAD Consulting firm. Well, he works as a consultant to one of America's most renowned software companies. We can only imagine how tight their schedule must be. However, both parents put their child ahead besides their career.

On August 31, 2019, Sheinelle shared a gallery of pictures from the wedding celebration she and her family attended in the Lake Como region of Italy.

From their marriage, Jones and Ojeh became proud parents of three lovely children. Their oldest child is a son named Kayin (10). Likewise, they share twins; a son named Uche (7) and a daughter named Clara (7).

Do you know how rich Sheinelle Jones is? Well, as per sources, she has an impressive net worth of $3 million as of 2019. The primary source of her income comes through her association with top news station such as NBC.

For your information, Hoda Kotb, the main co-anchor of NBC's Today show is one of the highest-paid female journalists.

Further, Jones earns an annual salary of over $98,000. Well, some of her colleagues like Al Roker and Jenna Bush Hager also earns decent earnings.