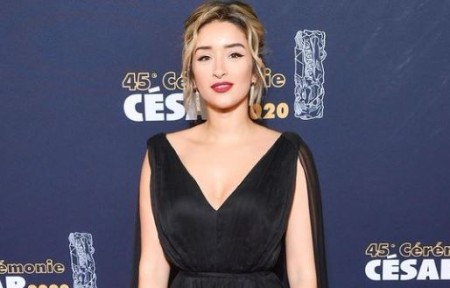 Shirine Boutella is an Algerian actress best known for her roles as Wassila in the 2019 movie, Papicha. She portrays the character of Lt. Sofia Belkacem in the 2021 tv series, Lupin. The Netflix series, Lupin is the first French production to enter the top 10 US. Additionally, Shirine has appeared in the 2017 Algerian tv series, El Khawa.

Shirine Boutelle was born on August 22, 1990, in Algiers, Algeria. She grew up through her teenage years in Algiers studying at a local high school. Later, she went to France and studied cinema at the Universite Sorbonne Nouvelle in Paris. Shirine has a mixed heritage including Austrian. Additionally, she can speak French, Arabic, English, and German.

Although she doesn't prefer to reveal her beloved on social media, the 30-year-old is happily married to her husband, Aziz. On December 25, 2019, Boutella shared a picture of her wedding day via Instagram.

The couple hosted their reception party at a commune called, Chailly-en-Bière. Additionally, Shirine's sister, Senda Boutella stunned the guests with her singing abilities. For their honeymoon, Aziz and Boutella went to Thailand. Further, the Lupin actress has been married for just over a year now. They don't share any children.

Prefers Not to Reveal Husband's Identity

If you have looked upon Shirine's Instagram then you will see she has posted several pictures with her husband. However, the actress hasn't shown her spouse's face in a single post. Also, she hasn't shared her love story. Nevertheless, Boutella happily enjoys every single day.

Luckily, we have found some images of Boutella's husband through her wedding photographer, Anastatica Fatima. On May 26, 2020, Shirine posted a throwback picture of her wedding where she wrote about her decision to not show her husband's face on social media. Hence, the details about Aziz's profession and his background is a mystery.

Besides being an actress, Shirine is a web videographer, YouTuber, and influencer. Boutella has an estimated net worth of $200,000 as of 2021. She is based in France and her annual salary ranges somewhere between $43,989-$56,644. Unlike Boutella, another international actress, Anamaria Marinca's net worth is $1 million.

After completing her education, Shirine began working as a hostess for Agency Profile Organization in France. From March 2016-August 2017, she worked as a production assistant and project manager for a company called, Well'Com.

On her self-titled YouTube channel, Boutella has over 563k subscribers. Likewise, she has over 2.3 million Instagram followers as of this writing. She has gained a massive fan following through her beauty tips, makeup tutorials, lifestyle, and travel videos.

Through her social media, Boutella collaborates with brands and agencies. In October 2017, she was presented with the Algerian Youtubers Awards. Do you know Shirine is the distant cousin of Sofia Boutella?

To date, Boutella has worked in five television shows and two movies. A few of her tv credits include the 2017 El Khawa and the 2020 Fugueuse.