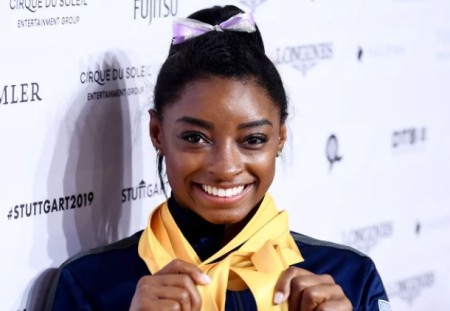 The five-time World all-around champion artistic gymnast, Simone Biles is just 23 years old. Additionally, she is already considered one of the greatest gymnasts of all time. Biles has won a total of 30 Olympic and World Championship medals combined. She is the first female gymnast to win a medal on every event at a single Olympic Games or World Championships.

Apart from her achievements, Simone is popular among fans on social media. Also, fans are always curious to know her relationships and love life. So, without any further ado, let's jump right into Simone's personal and professional life.

The decorated gymnast found her love partner in the midst of quarantine. Yes, there was speculation of Simone getting involved in a romantic relationship with NFL player, Jonathan Owens. As speculated Simone and her boyfriend, Owens began dating around July 2020.

On the occassion of Owens' 25th birthday, Biles posted an Instagram story of him giving her a piggyback ride. That's when fans knew something was up with the couple. On August 3, 2020, Biles made her relationship official by posting a picture with Ownes on Instagram.

Simone and Biles have been dating for three months as of now. The couple seems extremely happy with their relationship as they never miss any chance to show love for each other on social media. On October 12, Biles posted a picture with the caption: "Owens Biggest Fan!" However, it is not known when they will tie their wedding knot.

The 25-year-old, Jonathan Owens plays for the Houston Texas of NFL as a football safety. At the height of 1.80m, Owens also played college football at Missouri Western State.

He first signed with Arizona Cardinals as an undrafted free agent. However, in August 2019, Cardinals waived him. In September 2019, he signed with Houston's practice squad.

Before Owens, Simone was dating fellow national team gymnast, Stacey Ervin Jr. The former couple began dating in August 2017. Sadly, after three years of dating, the pair separated in March 2020. Further, Biles revealed her split from Stacey in a cover story for Vogue.

About the break-up, Simone said: “It’s hard being young and having that long of a relationship and then ending it.” For your information, Stacey was Biles' first boyfriend. Moving on seemed not so hard for Stacey as well. Just after a few days, Simone revealed her new boyfriend, Stacey introduced a hot blonde girl as his lover.

The 2020 Sportswoman of the Year, Simone Biles has a net worth of $2 million as per celebritynetworth. At a young age, she has able to amass such great wealth and fame. Majority of her income comes from prize money, sponsorships, campaign, and brands promotion. Additionally, Biles earns a decent sum of money from social media as well.

Simone gets paid a hefty amount from sponsorships such as Octagon Sports, Nike, Kellogg's, Hersey's, etc. The GK Elite Sportswear sells a line of leotards with her name on their products. Biles is also a spokesperson for Core Power's athletes' team. She has signed deals with Procter & Gamble and United Airlines.

Biles is also an entrepreneur who signed a deal with Spieth America to create a line of gymnastics equipment. She works with Caboodles to create and market products for active women. A few of the renowned gymnasts who has impressive wealth are Paris Berelc and Cara Kokenes.

Simone Arianne Biles was born on March 14, 1997, in Columbus, Ohio, the United States. She is the third of four children born to mother Shanon Biles and father Ronald Biles. Simone and her other siblings, Adria, Ashley, and Tevin, lived for a certain time in foster care due to their mother's inability to care for them.

At 15, Biles began homeschooling which helped her training increase from 20 to 32 hours a week. In January 2018, Simone enrolled at the University of the People, an online college and is currently studying business administration.