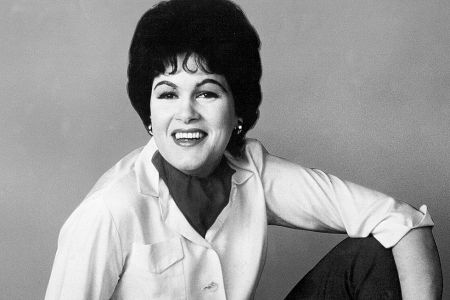 Country Music Hall of Fame honored singer, Patsy Cline grabbed the attention of millions with her rich, bold contralto voice. During the 20th century, there was no competition for the pop star, Cline because her record albums always came on the top of the Billboard chart. Her last single, Sweet Dreams also win the hearts of millions while becoming #5 on the country charts.

The late soloist, Cline spent her childhood on the South Kent Street in Winchester, Virginia. Other than that, she had a great friendship with several country singers like Loretta Lynn, Dottie West, and Jan Howard, among others. Let's find more interesting things about Patsy's personal life.

The late singer, Cline committed to her first husband, Gerald Cline, whose family had a reality-estate company in Frederick, Maryland. The two had their first encounter while Patsy was collaborating with Bill Peer for a song at the Moose Lodge in Brunswick, Maryland.

At the time of their first meeting, Gerald said, "It might not have been love at first sight when Patsy saw him, but it was for him." He then invited her to "One-nighters" as well as other concerts to perform her solo songs, and shortly they started dating.

The couple then united as soulmates in an intimate ceremony on 7th March 1953. After the marriage, Cline's husband, Cline couldn't come to attend her solo performance even though he enjoys it due to her international and domestic tours.

The situation of the pair's marital relationship started to get worse when Patsy told that she didn't know what love was after marrying Gerald to her close friend. Eventually, they separated after living for three together in late-1956 and finalized their divorce in 1957.

C.R.A.Z.Y artist, Patsy enjoyed the most adventurous moments with an American Linotype operator, Charlie Dick. The two had a romantic and tempestuous type of relationship, "fueled with lots of arguments, pills, passion, jealousy, success, tears, laughter, and drinking habits."

The duo eventually had their first encounter in 1956, while Cline was performing with a Virginia-based local band. During their first interaction, Charlie asked Patsy to dance, but she said, "I can't dance while I'm working, okay?" Then, they started enjoying a lovely time together.

After spending quality moments, Cline told her fellow Grand Ole Opry pianist, Del Wood that, "she met a boy who was the same age, wearing hurricane pants and she fell in love for the first time, and it's for real" in 1956. She and Charlie then walked down the aisle on 15th September 1957.

The pair became "heavy drinkers" and often fought, but never ended up their marriage. They also had one particular conflict, where the police arrested Charlie after he and Patsy became physical. Nevertheless, their relationship was still under their hands until Patsy left the world during a plane crash in Camden, Tennessee on 5th March 1963.

The reason of the plane crash was terrific heavy weather, in which Patsy's wristwatch stopped at 6:20 p.m. Many of her fans said that was a sign of her end at the age of 30. Later, her family members and friends buried Patsy at Shenandoah Memorial Park in Winchester, Virginia.

More to this, Cline's daughter, Julie was a vital part of Patsy's legacy because she shows how her mother was doing in her singing career. When Charlie passed away at the age of 81 in 2015, Fudge established a museum dedicating to her mom, Cline in Nashville, Tennessee.

Just like Patsy's amazing legacy of life, some other celebrities, including Joan Ford and David Bale received a tribute after spending a great life before facing death.

If You're Passionate In Reading Celebrities' Personal Life As Well As Career Highlights - Visit Married Celeb!!!