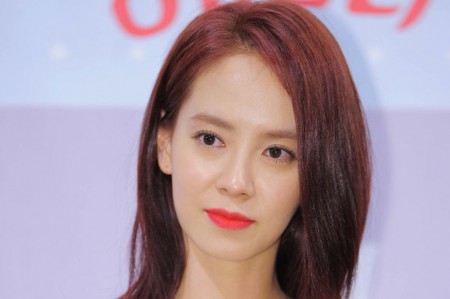 Fourth time SBS Entertainment Award-winning actress, Song Ji-hyo is popular for her portrayal of Yoon Jin-sung in the South Korean horror movie, Wishing Stairs. She is also notable as the former host of the music program, Inkigayo, on the SBS network. Currently, she is hosting the SBS' variety show, Running Man.

Born 15th August 1981, her birth name is Cheon Seong-im, and she grew up with her younger siblings, including Cheon Seong-moon in Pohang, North Gyeongsang Province, South Korea. So far, is she dating or married to someone? Find out more details about Ji-hyo's personal life in the following sections.

The 38-year-old actress, Song is reportedly single. Despite being a famous TV personality, she isn't much chatty about her love life in the media and keeps her personal details close to herself.

More to that, Ji-hyo was linked into a relationship with her Running Man co-host, Baek Chang Joo, who's currently serving as ta the CEO of C-JeS Entertainment. They eventually separated due to some misunderstanding in their relationship.

In the past, it was reported that Song was secretly dating a South Korean singer, Kim Jong-kook. Later, the rumors turned out to be fake when they both proclaimed that they're just good friends than nothing else.

Wishing Stairs star, Ji-hyo maintains a lucrative fortune of $12 Million as of 2019. Likewise, she also receives an astonishing payroll from her profession. According to Salary Expert, an actor/actress makes an average income of $18,922 (₩21,955,889).

Song currently hosts the South Korean comedy-game show, Running Man with Yoo Jae-suk, Kim Jong-kook, and Lee Kwang-soo, among others. Just like her, some other South Korean actors like Lee Min-Ho and Ji Chang-wook are also working on numerous TV shows.

Pursuing in the Field of Entertainment

Song Ji-hyo started her career as a model and made her debut in JTL's music video, Just Say Goodbye, in 2001. She further appeared in the role of Min-jung in the drama series, Age of Innocence, in 2002. She also guest-starred in many TV shows, including Detectives in Trouble, Listen to Love, and several others.

Take a look at Song Ji-hyo's Cuteness on KOCOWA TV

Ji-hyo got her life-turning opportunity to star in Yun Jae-yeon's horror film, Wishing Stairs in 2003. She then acted as Seo Yoo-jin in the crime thriller film, Some in 2004. Similarly, her other movie credits are Late Blossom, Code Name: Jackal, Super Express, etc. She recently appeared in the 2019 movie, Daughter.

The prominent actress, Ji-hyo received many honorable awards and nominations throughout her prolific career. She received her first award nomination at the 24th Blue Dragon Film Awards for best actress in 2003.

Initially, Song won the 4th SBS Entertainment Award for hosting the Running Man show in 2010. She then earned an MBC Drama Award for her movie, Gyebaek, in 2011. She further received an Annual DramaFever Award as the best actress of the year for her movie, Emergency Couple in 2015.

Song Ji-hyo is serving in the marketing and advertising company, Creative Group, Inc., as a agent which satisfies their customers from their business services. The company was established in 1970 with the help of John S. Bomba, James Hayden, Chris Servinis, and others.

Ji-hyo helps to work for the advertising agency and professional management business of the company, where she deals with her clients and model. She also collaborated with Kiki Magazine to promote the new-generation models to various online trends and media outlets.

If You're Interested To Read, Then Visit Married Celeb For More Biographies & Articles!!!