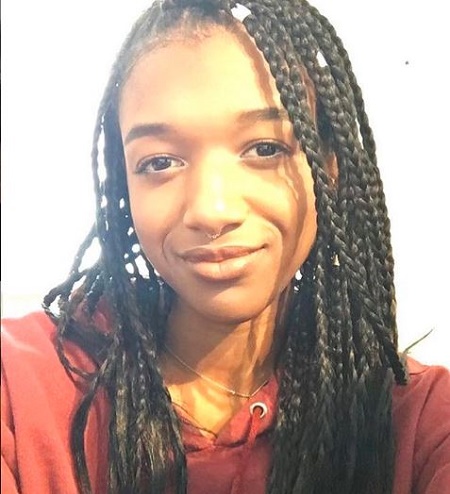 Sophia Hardison is an American celebrity child who is known as the single child of the ex-couple, Kadeem Hardison and Chante Moore. Her father, Kadeem is an actor and director who is famously known for his main role Dwayne Cleofis Wayne in NBC drama, A Different World. Whereas her mother, Chante is a singer-songwriter, actress, TV personality, and author who defined herself as a singer of R&B.

She was born on 27 September 1996, in New York City, New York, United States. She holds American citizenship and is of Afro-American ethnicity.  Her grandparents are Bethann Hardison, Virginia Moore, Larry Moore, and Donald McFadden. Further, she has one-half brother, Kenny Lattimore Jr., 17.

Is Sophia Dating Anyone? Know About Her Relationship Status

No, the 23-year-old Sophia doesn't seem to be dating anyone at the moment. Until now, she has never disclosed any details of her love affairs to the public. So, she is a single lady officially, and she cherishes her singularity.

In addition, Hardison focuses on her education before starting a new relationship with her boyfriend or lover. In the meantime, she spends a good time with her parents who are very supportive of her and also posts lovely photos on her Instagram account with them.

Her divorced parents, Hardison, 54, and Moore, 53, were reportedly together for nearly three years. Before one year of their marriage, they welcomed Sophia in 1996. They actually exchanged wedding vows on November 17, 1997, privately.

However, they announced their split in 2000 after being together for a period of 3 years. According to online tabloids, the exact reason behind their seperation was an extramarital love affair of Kadeem with another woman whose name was Cree Summers. The two didn't spend much time being together, right after their divorce.

However probably one of the most surprising things is that these exes-spouses are still in amicable terms, and co-parents their daughter Sophia together. In fact, in speaking to Madamenoire in 2013, the R&B singer clarified the true friendship with the estranged spouse even after the partition. And she added that Hardison thanked her for the kind of friendship that they shared.

Moore, who debuted her studio album Precious in 1992, wed singer Kenny Lattimore, 50 years of age. They exchanged the vows in Jamaica on New Year's Day January 1, 2002, at a private ceremony.

During the period of their marital life, they gave birth to a son Kenny, Jr., on April 10, 2003. Sadly, being married couple for nine years, they announced their divorce on January 11, 2011, saying irreconcilable differences.

How Wealthy is Sophia Hardison?

Meanwhile, the career of Sophia is still a mystery, so her real source of income is under investigation. As a celebrity kid, she is now living a luxurious lifestyle in the property of her parents, just like another celebrity kid, Layden Mcgrady.

On the other hand, her dad, the son of Donald McFadden and Bethann Hardison, has a net worth of $2 million as of 2020. He made this amount from his directing and acting profession. Whereas Sophia's mom, Chante Moore, has a staggering worth of $1.5 Million. She amassed this amount by her multiple works as a singer-songwriter, actress, and author.