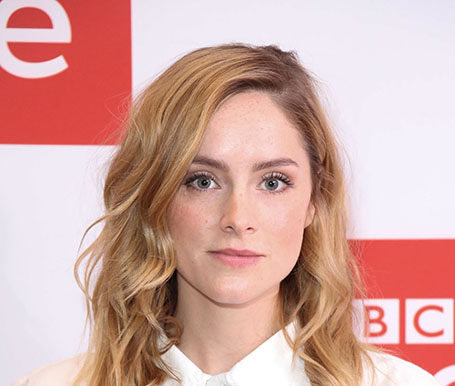 English actress Sophie Rundle seems fascinated by historical dramas and classic tales. She has appeared in two of the Charles Dickens adaptations; Great Expectation and Dickensian.

Sophie was born on April 21, 1988, in Wycombe, Buckinghamshire to Michael Rundle and Fiona Rundle. She grew up with two brothers James Rundle and Henry Rundle and attended the Bournemouth School for Girls. Sophie later graduated from the Royal Academy of Dramatic Arts in 2011.

Gentleman Jack's actress Sophie met her fiance Matt Stokoe for the first time in the set of TV series Jamestown. Matt is also an English actor who is best known for Misfits, Bodyguard and The Musketeers. Besides Jamestown, the couple Sophie and Matt have worked together in several BBC's TV series.

Although Sophie and Matt are engaged for several years, the pair haven't announced their marriage yet. Until now, the celebrity couple has kept their relationship low-profile. But Sophie was the one who spoke about their engagement in an interview. She said;

We got engaged a couple of weeks ago. The whole wedding thing is weird, though. Everyone expects you to be desperate to be a princess for the day… that’s really not my scene.

Together, Sophie and Matt have made a horror drama Rose. The couple seems to enjoy working in going places together. American actress

What Is Sophie's Net Worth?

Sophie hasn't disclosed her net worth but it is well over $7 million. While American actress Cheryl Howard owns a huge net worth compared to Sophie. She is one of the regular cast of BBC One's historical drama series. Besides TV series, Sophie has appeared in films like; Small Town Folk, Great Expectations, Little Stars, The Face of an Angel, An Inspector Calla and The Midnight Sky.

Sophie has performed The Vortex in 2013 at Rose Theatre. A year later in 2014, she performed among the theatre casts of Howard Davies at the Royal National Theatre. Similarly, Sophie's last theatre act was at the Hampstead Theatre where she played the role of Sofiya in Wild Honey.

Sophie is all set to take part in the premiere of the upcoming BBC One's TV series The Nest. On August 28, 2019, BBC One announced the new thriller drama on Twitter. The Nest is written by BAFTA award winner writer Nicole Taylor.

BBC One released The Nest's official trailer on March 3, 2020:

Peaky Blinders' lead actress Sophie will appear alongside the Line of Duty's star Martin Compston in The Nest. The series is set to be released in five different parts and is all about love, money and the price of being able to buy whatever you want.

More to that, she is currently sharing screen with versatile actors like Cillian Murphy, Kate Phillips and many others.