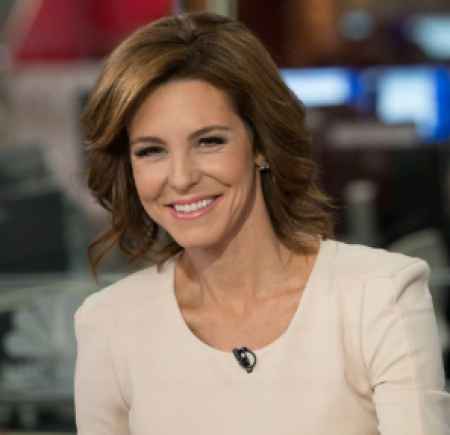 Stephanie Rhule is an American news anchor and the news correspondent for the MSNBC Live. She has also worked for some of the top-notch news channels. Likewise, she is one of the prominent leaders supporting women network committee in her domain. So far, Rhule is the wife and mother of three children.

Stephanie was born on December 24, 1975, in Park Ridge, New Jersey. Her mother’s name is Louise Ruhle and her father's identity is yet to be disclosed. Further, she has a sister and her grandparents are from Fort Lee. Concerning her education, she went to Lehigh University and has a bachelors degree in International Business.

Moreover, she also visited a few countries like Kenya, Italy and Gautemala as a part of her exchange program.

Before joining the media stream, Rhule worked as a hedge fund sales in Credit Suisse. Afterward, she became a vice president and became the highest producing credit derivative salesperson in the U.S.

Prior to that, Rhule joined Deutsche Bank where she served as the managing director in Global Market Senior Relationship Management.

In 2015, Rhule hosted Haiti: Open For Business? a documentary that explores Haiti’s rising market five years after the country was hit by a destructive earthquake.

Rhule is also the editor to the Shape magazine where she writes about women-centered development as well as women empowerment. Also, she has come up with Ali Velshi, co-hosts Velshi & Ruhle which airs on weekdays.

Currently, she is a member of 100 Women in Hedge Funds, The Women's Bond Club and The White House Project.

She first met Andy in 2002 when she was working for the 'Credit Suisse'. The love birds dated for quite a time and eventually tied the knot in a private ceremony. The matrimonial ceremony was attended by family and close friends.

After a blissful marriage, the married couple is blessed with three children, Resse, Harrison, and Drew Beachley. Andy and Stephanie are currently happily living in Manhattan with their children without any news and rumors of separation or having extramarital affairs.

Have a glance on another American Meteorologist, Kelly Ann Cicalese

Stephanie Rhule's Net worth and Salary

Stephanie has an estimated net worth over $5 million. Being still active in the profession, the increment in her total wealth is sure to come in the coming years.

How much is Stephanie Rhule's Income?

As per MSNBC salary pay scale, an average salary of MSNBC employees is ranged in between $45,652 to $90,740 annually. Similarly, news anchor of the same network receives a pay cheque of $194,490 annually. Therefore, concerning the status and experience, Stephanie's remuneration is expected to be over $500,000 dollars annually.

Furthermore, she is also involved in various philanthropic work where she raises funds and donates for the welfare of others. Also, her works toward women empowerment has helped her raise fund to her non-profit organisation.

Other than being a famous journalist, Rhule is also active on social networking sites such as Instagram and Twitter.