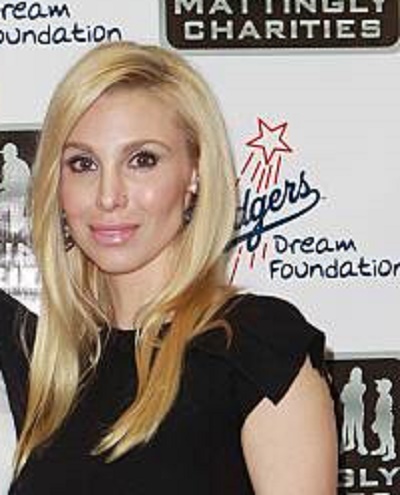 A wedding to a celebrity will cost you less privacy and endless media coverage. Stephanie Slemer, who is the wife of the first professional baseball baseman, Mark McGwire, resounds with the same situation.

Slemer was born in 1977 to the American parents Robert and Cindy Slemer in the United States. Moreover, she has one older sister named Julie Evans. So far, she is a graduated of Eastern Illinois (1999) with a degree in speech communication.

How long been Stephanie and Mark are Married?

Stephanie Slemer, who is 14 years younger than Mark have been married for 18 years. In fact, the age gape has helped them because Mark is so much more mature and has a lot of experience, she claimed.

Slemer and MLB player, McGwire, 56, tied the knot at a private wedding ceremony on April 20, 2002. At St. Las Vegas, Nevada, United States, the event was held infornt of their loved ones.

The married couple has been living a joyous life together since the day. Additionally, a proud wife, Stephanie said Mark is funny and he's the most loving person she ever met. "He'd do anything to anyone."

42, Stephanie met McGwire in St. Louis, through a mutual friend, while working as Tap Pharmaceuticals sales representative. "My parents weren't big fans of the sport, so they weren't as gaga over him as other parents may be," she told the newspaper.

The two dated for a year and a half before revealing their engagement a few weeks ago in 2001. Now, as a happily married couple, they just take things day by day and enjoy being together.

The married duo is blessed with five kids from their marital life. Their triplet children, named Monet Rose McGwire, Marlo Rose McGwire, and Monroe Rose, were born on 1 June 2010.

Stephanie and Mark then later welcomed their two sons, named Max McGwire and Mason McGwire. As of now, the whole family is now living carefree together in Huntington Beach, California and is also enjoying time with family, relaxing and traveling.

The whole family together has created the Mark McGwire Children's Foundation. It funds programs that help children that have been exploited sexually and physically cope with a traumatic childhood.

The first wife of Mark McGwire

The first baseman of USC met a batgirl named Kathleen Hughes in the early 1980s when as a junior he hit .387 and 32 home runs. Then after a few years of the love affair, they got hitched in 1984.

But that they had divorced later in 1990, retiring the same month after a 16-season career in which he hit 583 homers. Ex-wife Kathy once stated, “We’re dull. Mark comes home, has something to eat, we watch ESPN SportsCenter and go to sleep.”

The exes share one son together from their six years of conjugal, Matthew McGwire, born in 1987. The pair's son Matthew is now 32 years old.

Being a celebrity wife, Stephanie Slemer now lives a very rich lifestyle along with her family. Similarly, a former baseball outfielder, Carlos Beltran's wife Jessica Beltran also lives a luxurious life with the husband worth $90 Million worth as of 2020.

A former Slemer, used to work as a sales agent for a pharmaceutical company in St. Louis. Therefore she could be received a reasonable amount of money. On the other hand, her husband Mark holds a $60 million net value throughout his coaching and MLB career.

Moreover, Mark's salary is estimated at $8,333,333. While another MLB player, Jose Canseco, the ex-husband of Jessica Canseco also made a heavy amount from his career.

If You're Looking For More Interesting Biographies, Visit Marrieceleb!!!