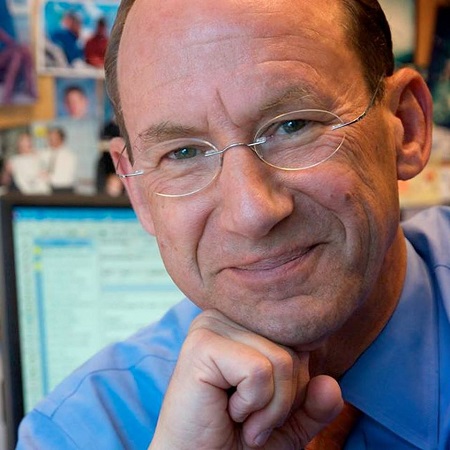 Steve Handelsman is a three times Emmy Awards American journalist who is best known for his work at NBC as a national correspondent. Likewise, his stories can be seen on numerous NBC stations especially on WMGM-TV. Further, his reports also made an appearance on The Weather Channel and CNBC.

He was born December 9, 1948, in Baltimore, Maryland, the United States as Stephen Hale Handelsman. But the information about his parents still remains private. So far, he completes his graduation from Duke University. Steve holds American citizenship and belongs to white ethnicity.

Who Is Steve Handelsman Married?

Seventy-One years old Steve is happily married to his long term supportive, wife Ruth E. Handelsman. As of now, the couple has been sparking their marital relationship for over three decades with no sign of divorce.

But sadly, the duo prefers a very low key wedded life since their marriage. Therefore due to their secretive nature, it is still not known when they walked down the romantic nuptials aisle with each other. It seems they said Yes I Do infornt of their loved ones.

Nevertheless, Handelsman and his love of life Ruth have shared a very loving and long-lasting relationship for a long time. Similarly, after being in a nuptial life for so many years, they have two adults children. But still, their kid's name is not accessible to the media

Although Steve Handelsman's exact net worth has not been officially confirmed, some sources considered it is approx. $1 Million. He has amassed a giant worth from his broadcasting career as he served as a journalist from 1984 to 2017. Similarly, Sue Simmons is another retired WNBC-TV reporter with the worth of $5 Million.

According to various resources, the NBC news pays reporters in the range from an average of $42,335 to $148,566 in a year. Thus working for about 36 years as a national correspondent, Handelsman might have earned the annual payroll of around $70,000.

Apart from his reporting work, he used to teach at Anacostia High School in Washington, D.C. in English and Mass Media. He worked there for around three years.

Yes, Steve is no longer with NBC News. Following 33 years of broadcasting from Washington D.C., he retires in January 2017. During his long tenure at News4, he traveled around the world and picked up a lot of news.

His several stories at NBC include Hurricane Andrew, Hurricane Katrina, and Hurricane Hugo. Moreover, he covered the opening of the Berlin Wall, Pope John Paul II’s death, The Gulf War,  terrorist attacks in Brussels and London, The Iraq War, and among others.

In addition, Handelsman covers national political affairs including the presidential election in 2016. Since about 1984, he has been assigned political coverage. Well, in 1984 he began working for NBC in Washington, where he was a 1st national reporter for channels operated by NBC.

Prior to that, he worked for WLWT-TV in Cincinnati and WXYZ-TV in Detroit.