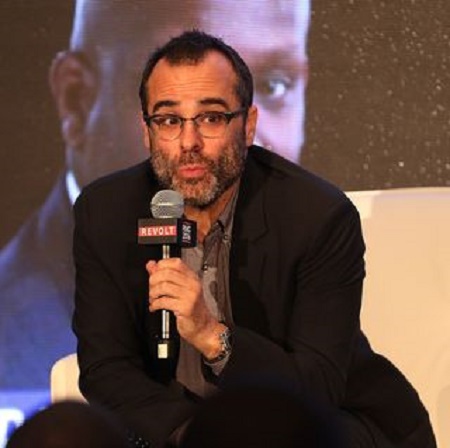 Steven Greener is best known as the husband of American broadcast journalist and television talk show host, Tamron Hall. By profession, Steven is a music executive at Primary Wave who works as a partner. Some of his contributions to output include Guess Who, The Bernie Mac Show, and Soul Men.

Steven Greener was born on June 28, 1967, in the United States of America. He holds American citizenship and is of white ethnicity. As of 2020, his age is 52.

A music executive, Steven Greener started dating his future wife Tamron after her Today show exit in February 2017. After dating for several years, they exchanged wedding vows privately in 2019. But there are no other details about their ceremony to the media.

The Texan reporter explained why she loves to keep their marriage private:

“I always thought, ‘One day I’ll get married, and I don’t want my husband to have to look at old episodes of me gushing over the last guy.’  So I’ve always been very cautious. I think today, people mistake privacy for secrecy.  People say he’s my ‘, secret husband.’ But we were going everywhere together; it was just a private thing I needed to protect. With Steven, it is great to have this guy who is rooting me on, and he was the first person I’ve ever dated when I haven’t been on television

Steven's wife said that Greener was her first and only boyfriend who did not have to turn on the TV to see her, and she thinks that's been important. Also, the 49-year-old broadcast journalist told she and Steven made a promise to each other to "never turn on each other" and "always be on each other's side in goodhousekeeping.

Father of one Son

Aged 52, Steven Greener and his wife Tamron became parents when they welcomed their firstborn child or son named Moses on April 24, 2019. The baby weighed 6lbs., 4 oz during the birth time.

The former Today show host said Moses was born in a multicultural home. It means he took part in a traditional Jewish circumcision ritual and will be christened. Father of one son Steven claimed that he's constantly amazed by how lucky he is.

Tamron is one of the most authentic, loving, honest, caring people I’ve ever known. My favorite part of marriage and fatherhood so far is realizing every day I am exactly where I was always meant to be with my family. I am at home, Greener added.

How much net worth Steven Greener holds?

Working in the entertainment industry, Steven Greener earns a good amount of money within himself. Steven's precise amount of net worth is not disclosed anywhere but it could be a thousand dollars. As a music executive, he handles the management of music talent from celebrities such as Cee Lo Green, Fantasia Barrino, Melissa Etheridge, Brandy, Cypress Hill, Bernie Mac, etc.