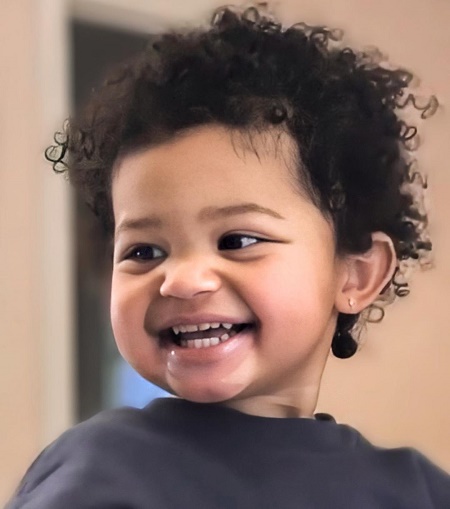 Stormi Webster is one of the world's luckiest kids who have achieved tremendous fame since her birth. She is famous as the daughter of the world's youngest billionaire, Kylie Jenner, and her ex-boyfriend, Travis Scott. Her mom. Kylie is a media personality, model, and businesswoman who is known as the owner of cosmetic company Kylie Cosmetics. While her dad, Travis is a singer, rapper, songwriter, and record producer.

She was born on February 1, 2018, in the United States. She is the grandchild of Kris Jenner, Caitlyn Jenner, Wanda Webster, and Jacques Webster. His aunties include Kendall Jenner, Kim Kardashian, Kourtney Kardashian, and Khloe Kardashian. While her uncles are Rob, Burt, Brandon and Brody Jenner.

The 2 years old celebrity kid Stormi is still in her parent's surveillance. Thus there is no chance to engage in kind of love affairs. For now, she is enjoying her childhood along with her parents, and as well as cousins.

Being the celebrity popular kids, Webster has already earned many fans following at such a young age. Her mom, Kylie, and dad, Scott, recently spent $100 thousand for her 2nd birthday party on a Disney World trip.

Similarly, in early 2020, the Kylie Cosmetics mogul gifted Stormi a diamond ring on Christmas special. More precisely, Stormi’s grandmother Kris also rewarded her with a kiddie cute house that looks just like one Jenner had as a child.

Recently on June 16, 2020, Webster joined her mom for the cover shoot of   Vogue Czechoslovakia amid the ongoing coronavirus pandemic. Kylie posted the cover photo on Tuesday with the caption on her Instagram account: "New cover with my baby for @vogueczechoslovakia shot at home on my iPhone 🤍".

Now, talking about her parents' relationship, Jenner, 22, and Travis, 28, are no more together. The two first met eachother at Coachella while the rapper was performing in 2017. That same year April month, Reality star Kylie and Antidote hitmaker Travis started dating.

However, they announced their break up in October 2019 after being together for more than two years because of their busy schedules. Since then, they have co-parented their baby girl ever after a two-year relationship.

Despite the spilt, the ex-couple could not stop enjoying their daughter's functions together. Now, multiple sources report that Kylie and Scott have gotten back together a few months ago. But another source also stated that they just co-parent and support each other as a friend.

But both parties remain silent on this matter. Whatever it is they are perfectly leading parenthood to their 2 years old little girl. The model Jenner recently on the occasion of father's day wishes her ex Travis a Happy Father's Day by sharing father-daughter pair pictures on her Instagram Story.

"Happy father's day @travisscott the best daddy to our daughter," she wrote.

When it comes to her mother's total net worth, it is roughly $900 million as of June 2020, making her one of the youngest billionaires worldwide. The large bulk of her fortune comes from a cosmetics company called Kylie Cosmetics, which is valued at $1.2 billion, now.

In January 2019, Jenner sold 51 percent majority stake of Kylie Cosmetics to Coty Inc. for $600 million. But after pretax, she had pocketed $540 million. As per celebrity net worth, she has made between $40 to $100 million from her various endeavors over the past years. Additionally, she makes a massive sum as part of the TV series, Keeping Up with the Kardashians.

Whereas Stormi's father, Travis Scott who is known as the world's highest-paid rappers, has a $58 million worth. His earnings credits to his career as a musician with his records topping the charts on the Billboard, and his touring gigs. His recent tour through Astroworld grossed $65 million.