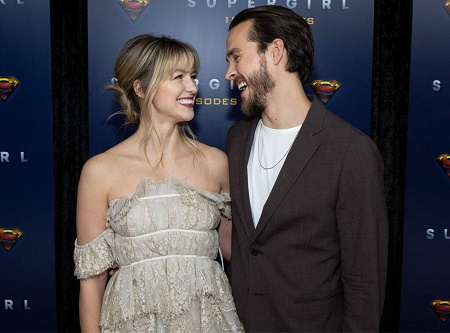 The American actress and singer, Melissa Benoist who is known for her role Kara Zor-El in the superhero drama series Supergirl (2015–present) recently have announced that she and her partner, Chris Wood, are expecting their first child.

On March 4, 2020, 31 years old actress and her actor husband took their social media to share the good news they'are welcoming their firstborn."A non-canine child is coming to our family very soon!!!", wife, Melissa said on her official Instagram.

In the post, Benoist continued saying,"@christophrwood has always been an old dad by nature but now he's going to be a real one!". She shared a picture of her husband, together with two dogs, dressed in all blue.

Not only Benoist but the proud dad to be, Chris also has an announcement of Melissa's pregnancy on Instagram with a hilarious photo on the same date. In the post of The Vampire Diaries' star, wife, Melissa pretended to cradle the fake baby bump of her husband where he captured: The photo is a joke but the news is real.

The Supergirl stars had their first encounter on their show set in 2016 and have officially started dating March 2017. Then later, in early 2019, this Hollywood couple announced their engagement. Fiance, Melissa's ring was designed by designer, Jennifer Meyer which worth is estimated at $100,000.

The parents to the be, Melissa and Wood shared the wedding vows on September 1, 2019, at a private California estate in Ojai, Calif. The event was held among their family and friends, including some of their co-stars, Odette Annable, Kevin Smith, and Paul Wesley.

Before marring the current partner, Chris, The Flash star was previously in a marital relationship with her first husband or “Glee” co-star Blake Jenner for 2 years. They got hitched privately in March 2015.

However, the exes couple later parted their ways in 2016 and finalize their divorce in December 2017. As for Chris, the Ohio native had a love affair with his Carrie Diaries co-star AnnaSophia Robb in 2013 and then with his Containment co-star Hanna Mangan Lawrence in 2015.