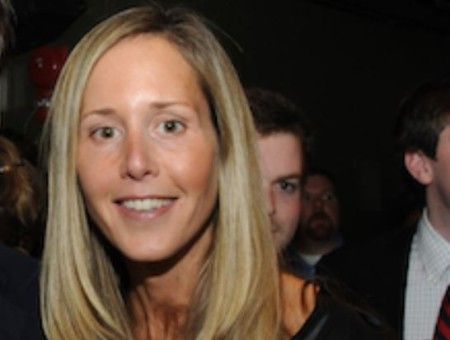 In a successful marriage, there is immense love between the husband and wife, which clears out all barriers in their relationship. But, sometimes, it takes time to find love, and eventually, some lucky ones find themselves meant to be from their childhood, and together. When it comes to Susan Andrews and Tucker Carlson, they are together since they were in school.

Andrews was born in the United States of America and belongs to a white ethnicity/race. Moreover, she holds American citizenship. To know more in details about Susan's personal life, read the article till the end.

Susan Andrews and her husband, Tucker Carlson are living the most joyful moments in their marital relationship. The couple tied the knot in 1991, in a private ceremony attended by their close ones.

The soulmates are childhood sweethearts who met while studying at the St. George's School situated in Middletown, Rhode Island. Shortly they became friends and started dating upon graduation.

At the time of dating, the pair were 15 years old. More to that, Susan and Tucker decided to get married while studying at Trinity College, located in Hartford, Connecticut. Susan later went to her father, George E. Andrews II, who was the principal of St. George's School and asked him for his permission to marry Tucker.

Fortunately, Susan's father approved her request, and shortly they fixed her engagement with Carlson. After graduating from college, Susan and Tucker united as husband and wife and still keeps a cheerful bond even after 28 long years.

Susan and Tucker are blessed with four lovely kids. At the beginning of their new journey of life, they welcomed their first member of their family, a daughter, Lillie Carlson on 22nd November 1994. Currently, she reached the age of 25 and enrolled at the University of Virginia.

The couple later welcomed a baby boy, Buckley Carlson (born in 1997), and the family went on a family trip to Little St. Simons Island, Georgia. Eventually, Buckley and Lillie started playing a friendly alligator. But, the tour guide told them not to play, and the kids stopped thankfully.

The pair also shares two beautiful daughters, Hopie Carlson (born in 1999) and Dorothy Carlson. As of now, their daughters attend St. George's School, where Carlson is in 9th grade, and Dorothy is in 6th grade.

Net Worth of Susan's Husband (Tucker)

Susan Andrews' spouse, Carlson maintains a whopping fortune of $20 Million as of 2019 which is a way more than Karen Finney. Meanwhile, he earns a lucrative salary from his profession. Likewise, the average wage of a political analyst is $94,747 annually. So, his income might be similar to a political commentator in the US.

On the other hand, Susan and her husband, Tucker also bought a house in Kentucky for $2 Million, but later, sold out at $4 Million. Their former rooftop consists of six bedrooms, eight bathrooms on 4,800 square feet. In addition to his earnings, he also receives quite a paycheque through his show, Tucker Carlson Tonight where Greg Gutfeld has also appeared.

Susan's husband, Tucker wrote his first book, Politicians, Partisans, and Parasites: My Adventures in Cable News in 2003, which is about the professional works done by Carlson in the field of politics. The book also garnered four and a half out of five from 59 reviewers.

Carlson also wrote and published his second book, Ship of Fools: How a Selfish Ruling Class Is Bringing America to the Brink of Revolution on 2nd October 2018. For his book, he listed #1 best seller of 2018 by The New York Times.

If You're Interested In Reading Then, Visit Married Celeb!!! To Explore More Diversifying Biographies & Articles