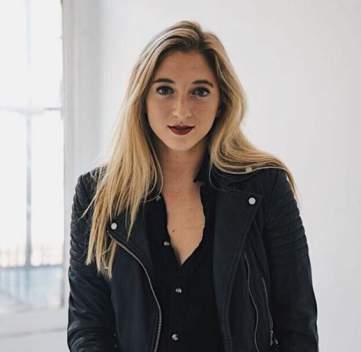 The unique personality, Sydney Mesher is well known for her outstanding dancing style. She represents Zembedee Management and Clear Talent Group and performed for various artists and brands throughout her career.

Sydney was born on July 25, 1998, in Portland, Oregon and is a New York-based dancer and model. Despite, being born without her left hand she has achieved so many things at an early age. She found confidence in her unique body and praises all body types. Recently she graduated from Pace University with her BFA in Commercial Dance.

Does Sydney Mesher has a Boyfriend?

Though being so much popular in each and every media, she keeps her personal life a little bit private. A very little is known about her family and friends due to her private nature. There are rarely pictures of her with her guy friends.

Scrolling through Instagram posts, it looks like she is single, however, reading some captions we can think otherwise. In her picture with Andrew Mulet who is also a dancer, Mesher captioned him being a special person.

On the other hand, another post on her birthday, Andrew captioned, Happy Birthday Babe. Because of these captions, some tabloids might confuse her relationship status but as long as she doesn't spill the beans about her dating life, nothing is confirmed.

They are often seen hanging out with friends to the various destination which she uploads in her official social sites account. With all the reports, it is likely that she is single and focused on her career.

Mesher has estimated net worth of $500,000, however, it hasn't been officially confirmed yet. Other professional dancers like; Ana Karla and Lilit Avagyan has the fortune of $5 Million and $19 Million respectively.

As one of the growing talents her fortune surely falls in a very good number without a doubt. Her annual income is over $50,000 which she accumulated by engaging in various brands.

She has modeled for Hollister's Gilly Hicks 2019 Holiday Campaign, stars in a Core Hydration Commercial series. As a dancer, she has performed for Kpop Group, BTS Official, at an intimate concert in LA.

Further, she is a part of an iconic Rockettes group from which she is paid between $1,400 and $1,500 each week while making $36,400 to $39,000 per year. Sydney is currently living a healthy lifestyle and is ready to achieve more success in the near future.

The dancing princess, Sydney secured her place as a Rockette after giving her fourth try in the Rockette audition. For the first time in the history of Rockettes, there is a dancer with a visible disability. On November 13, she made her debut at Radio City Music Hall as a Rockette which was founded in 1925.

Check out her incredible dancing style!!!

On that note, she stated that

I won't lie. I'm very humbled to be in this position. I am different in my own way. But that's what's so incredible about the Rockettes. Everyone is different in their own way-different countries, races, backgrounds. I'm just a new branch of that. I want to become new normal.

Rockettes creative director Karen Keeler concurs about Sydney being an incredibly versatile dancer with a strong work ethic. Additionally, she is also the first Rockettes dancer with Visible disability.