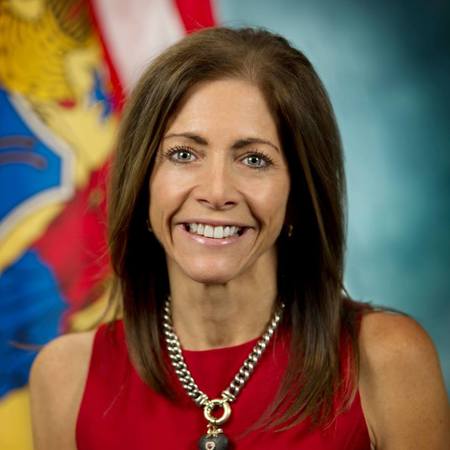 Today's article is about the Tammy Snyder Murphy who is the wife of the 56th Governor of New Jersey Phil Murphy, elected in 2018. Moreover, the current First Lady of New Jersey, Tammy is an American banker and also used to work at Goldman Sachs. Furthermore, Murphy has taken all responsibilities and setting a good example as a First Lady. Besides, she has followed a public role with a policy portfolio and an office down the hall from her husband.

The current New Jersey's First Lady, Tammy Snyder Murphy was born as Tammy Snyder on August 5, 1965, in Virginia Beach, Virginia, USA. She is the daughter of Edward Snyder and Jean Snyder, who owned car dealerships. She holds an American nationality and belongs to white ethnicity. Moreover, she attended the University of Virginia and graduated in 1987 with a Bachelor of Arts in Communication and English.

Well, Tammy, 55 is a married woman. She is married to her love of life turned husband, Phil Murphy. Her husband, Phil Murphy is the 56th Governor of New Jersey since January 2018. However, the couple met for the first time in 1987 when both worked at Goldman Sachs. Tammy reached out to Phil in 1993 after the death of his brother and the two had dinner.

On the other hand, they were engaged 18 days later and married six months in 1993. Since after the wedding of their the duo is living a happy married life. Apart, the love birds are blessed with four children from their marital life. As of now, she is living a happy life with her family in New Jersey.

Tammy is living a happy parenthood life with her husband. Moreover, the duo shared four children, three sons, Josh Murphy, Charlie Murphy, and Sam Murphy, and a daughter, Emma Murphy. Apart, their children are busy in their respective fields. On the other hand, the family members are all fans of soccer, including playing family soccer matches.

Besides, the couple along with their four children's moved to Middletown Township, New Jersey. Apart, the family also lived in Germany for four years while her husband, Phil was serving as ambassador. As of now, she is living a happy life with her husband and four children.

Tammy Snyder Murphy might have earned a decent amount of money form her career as a banker. However, she only came into limelight after being the First Lady of New Jersey so, we don't have net worth exact information right now. But, her net worth might be in a million of dollars.

Stay in Touch With Married Celeb For Celebrities Bios!!!