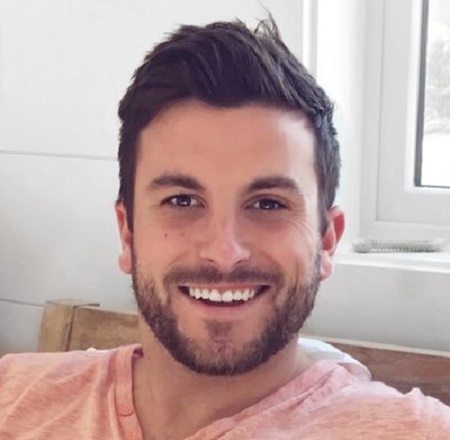 American reality TV star, Tanner Tolbert, rose to fame after appearing on the 11th season of the reality series, The Bachelorette. Also, he is famous for starring in season 2 of Bachelor in Paradise with his partner Jade Roper. Besides, he is a former Playboy model.

Born on 2nd May 1987 in Kansas City, the U.S, Tanner holds American citizenship and belongs to white ethnicity.  The actor who is graduated from the University of Kansas is the only son of father, Stephen Andrew Tolbert, and mother, Karin Barragato. Moreover, he has one sister named Kara Tolbert.

The 32-year-old former playboy model is in a marital life with Reality TV Star, Jade Roper Tolbert. They met for the first time on the show Bachelor in Paradise back in 2015 and ultimately fell in love with each other.

After a year, the handsome hunk Tanner Tanner proposed his future wife with an engagement ring in a romantic way at Mexica Resort.

Month after the engagement, actor Tolbert and actress Roper tied the romantic knot on January 24, 2016. Their wedding ceremony was held at a beautiful Monarch Beach Resort of Dana Point, California.

Following the wedding, their reception was held at Hotel Ballroom. The dinner was attended by almost 150 guests.

The couple recently celebrated their 3rd anniversary in 2019. Now, dad, Tanner Tolbert, and momma, Jade Ropper enjoy their married life since 2016 without any sign of tension with their two children.

As mentioned above, Tanner and his wife, Jade, share two kids, one daughter, and one son, from their marital solidarity. Emerson Avery Tolbert is the first daughter born on 21 August 2017, while on 31 July 2019 they welcomed their second baby, Brooks Easton.

Younger child Brooks weighed 7 lbs, 20 inches long, and 9 ounces during his birth. But delivering to their baby No.2 was not easy for them. Jade accidentally gave birth to their healthy son in her closet.

After giving birth to their kids, Tolbert and Roper are facing ups-and-down due to their sex life. Tanner told Nick during a podcast of The Viall Files that he is going to be romantic in the relationship, while his wife wants less after their first baby.

Tanner also poured out his pain by claiming they have completely changed their relationship. He also said on the podcast that,

It is tough. I feel like I’ve begged for it. And I don’t want to feel selfish—I hate asking, I hate trying, ’cause I don’t want it to be pity sex.

Shockingly, on Wednesday, 26th February 2019, mother Roper shared the heartbreak news about her miscarriage via Instagram. She faced the miscarriage even before birth of her first child.

Not only this, but they have also talked much about the loss of the baby via YouTube channel. On the video, they revealed that Jade became pregnant with the baby during a Fantasy Suite date on Bachelor in Paradise.

For more detail, have a look at the video:

Once, there were rumors that the marriage of Tanner and Jade was all drama and they did it just for the shake of money. But whatever it is, the couple proved everybody wrong today by now they live an excellent life together.

Now, two highly family-oriented parents are enjoying being the parents to their cute babies.

The renowned TV actor, Tanner Tolbert, has a net worth of $500 Thousand as of 2019. The key source of his earnings comes entirely from his stint as an actor. Likewise, his impressive work in the 1st season of The Bachelorette's reality show could help to earn $100 to $200 a day.

Apart from being a TV career, Tolbert also works as an economics boss at Legends Honda and as an associate coach at the University of (KU) Kansas football team. On the other hand, his wife, Jade Roper, is an American actress who has acquired the same net worth $500 Thousand.

To know about your favorite The Bachelorette's star, follow marriedceleb.