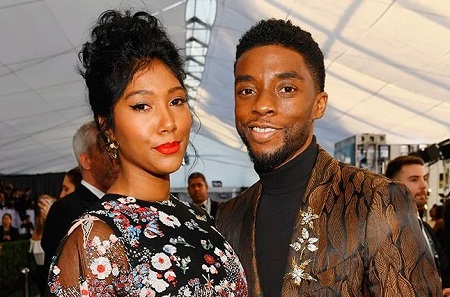 Deaths end life, not a relationship. Yes, it is very true in the case of a former aspiring singer, Taylor Simone Ledward who came to highlight following her boyfriend, Chadwick Boseman's death in August 2020. He passed away after his 4-year-long battle with colon cancer.

Well, Chadwick who was born on 29 November 1976 to African-American parents, Carolyn and Leroy Boseman, was a well known American actor. But he was most recognised worldwide for his superhero character Black Panther in Marvel Cinematic Universe's several films.

Today we will let you know the love history of Taylor and Chadwick. If you want to grab more information about their marital relationship then read the whole article.

Was Happily Married To Chadwick Boseman, Final Months Of His Life

Yes, you have read that correctly. As per as Boseman's family Instagram post, "Boseman died at his home "with his wife and family by his side", it seems the couple had tied the knot in a secret ceremony before his death.

But in the meantime, the exact date and time of their official wedding ceremony are still remaining private. In fact, most of their fans were not informed of their nuptials as they knew that they had just formal love relationship.

The actor's family revealed that the couple were privately married before his death in 2020. Before that, they announced their engagement in October 2019 during a date in Malibu, California, after dating for nearly three years.

It was December 2015, the couple's love rumours sparked after attending together at Los Angeles International Airport. Since then, they made an appearance at Hollywood events such as on Jimmy Kimmel Live! and as well as films premiere at Black Panther (2018) and 21 Bridges (2019).

But then the pair never admits their relationship to the media or public openly. Later, Taylor's grandmother stated in an interview with In Touch Weekly in April 2018, saying that they respect each other. She also added that her granddaughter Ledward is very happy and Chadwick is too.

Finally, for the first time, the 1.83 m tall late actor spoke about his romance with Ledward at the 50th NAACP Image Awards. He said: "Simone, you’re with me every day. I have to acknowledge you right now. Love you,”.

Likewise, they captured the last photo together at the NBA All-Star Game on February 2020.

Yes, the news of American actor, Chadwick's passing has shocked the nation. The star who was famous for his character T'Challa on Black Panther passed away on Friday, August 28, 2020, at his home. He was 43.

After his death, many celebrities took social media pages to share emotional tributes to the late actor, Chadwick. His fellow actor, Chris Evans, Don Cheadle, and Mark Ruffalo from the Marvel Cinematic Universe (MCU), are among them.

For more biographies and gossips on different personalities, Visit Marriedceleb !!!!