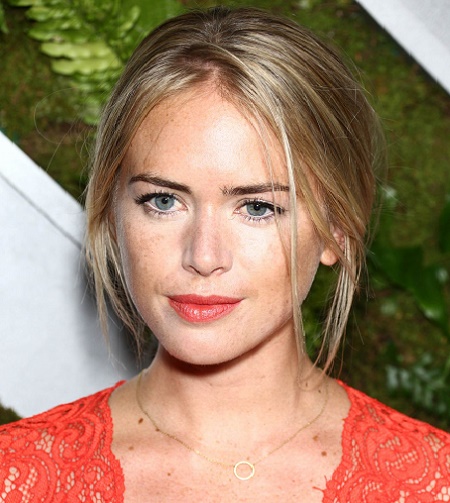 Theodora Miranne who trained at The Stella Adler Studio of Acting has not just received in her professional but also her married life. Well, this beautiful lady has been married to her husband Robert Marianne since 2016.

By profession, Theodora is a well-known actress and producer has acted in many Hollywood movies and television shows. Some of her hits roles include The Night Before (2015) Gemini Man (2019), and The Blacklist: Redemption (2017).

The lovebirds Theodora and Robert walked down the wedding aisle in an intimate ceremony on August 12, 2016. The couple chose the church in London for their big day, where they pronounced as a wife and husband between their closed ones. But their wedding is not full of details on the media.

The wedded partner genuinely appreciated each other and love to spend time together. Further, the two never hesitate to post amazing pictures on their respective social media after their big day. Scrolling Theodora's Instagram post, on the occasion of the couple's 2nd marriage anniversary in 2017, she posted a beautiful wedding shot.

Actress captioned: "One year of being married to this incredible man, anything is possible with you by my side". Similarly, she wished Robert on his Birthday via Instagram on July 30, saying, "Another year around the sun!!! Birthday boy, I love you".

And it's easy to tell us how much this adorable couple feels fortunate to have each other company with each other. The couple is living in a blissful married life together for three years. So far, no scandals or rumors are surrounding them as of now.

On August 26, 2019, The Kidnapping of a Fish actress confirmed her three months of pregnancy by sharing a picture of a baby bump with herself and her sweethearts. She said: "Meet the Parents (coming Jan 2020)". And since then she continues to share several photos of baby bumps with her upcoming baby.

Marianne's two became three. On December 21, 2019, they received a bundle of their joy or a tiny baby son named Leo Miranne. After birth, a proud dad shares his happiness to becoming a father on Instagram, saying, "Welcome to the world, my little Leo. Let your life be filled with fun, happiness, and light.

Now the new parents live in the Greater New York City Area with their son. Meanwhile, both of them are very busy balancing their professional and personal lives. In addition to this, the couple owns a dog called Brodie.