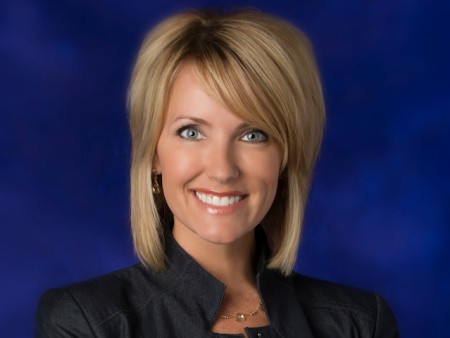 Tracy Kornet is an American Emmy Award-winning television host, writer, and producer. She joined WSMV-TV, Nashville, in 2014 and currently works as a evening news co-anchor. Previously, she worked in local tv stations in Texas and Phoenix. Tracy is one of the well-known reporters in Nashville.

Tracy was born in Chicago, but she grew up in Tampa, Florida. She hasn't revealed her actual age. Kornet graduated from the University of Kentucky, but she spent the first three years at Vanderbilt University in Nashville. There she studied French and International Relations. Her father, Jim, is a corporate trial lawyer. She has a stepmother named Collen Wing. Recently, her father and stepmother were stuck onboard Holland America's cruise ship Zaandam.

The anchor is a married woman, and she has a wonderful marital life with her husband, Frank Kornet. The couple first met as an undergraduate student at Vanderbilt University. Tracy's husband, Frank, is a former professional basketball player who played for Milwaukee Bucks from 1989-1991.

Tracy hasn't shared much about her wedding details, but it seems they tied their wedding knot in the early 1990s. The couple share three children; two sons, John and Luke, along with a daughter, Nicole. All three children played basketball during their school and college days. Luke is the tallest among his siblings, with a towering height of 7 feet 2 inches.

The oldest child, John, played at Ouachita Baptist University. He is currently a financial analyst at Stephens, Inc in Little Rock. Nicole, the middle child, played basketball at UCLA and the University of Oklahoma. She works at a record label company in Los Angeles. Likewise, the youngest son, Luke, was a stand-out player at Vanderbilt and now plays for the New York Knicks.

Apart from her personal life, Tracy is active as a secretary at the Sexual Assault Center. She also served as the master of ceremonies at Mad Hatter, the nonprofit's annual fundraiser in September 2019. Also, she serves on the state board of Habitat for Humanity.

The seven-time Emmy Award-winning reporter, Tracy Kornet, has a net worth of $1 million as of 2020. Apart from an anchor, she is a writer and a producer. She has amassed a decent fortune from her long professional career. Currently, as an evening news co-anchor, Kornet earns an annual salary of over $75,987, which is similar to Holly Thompson.