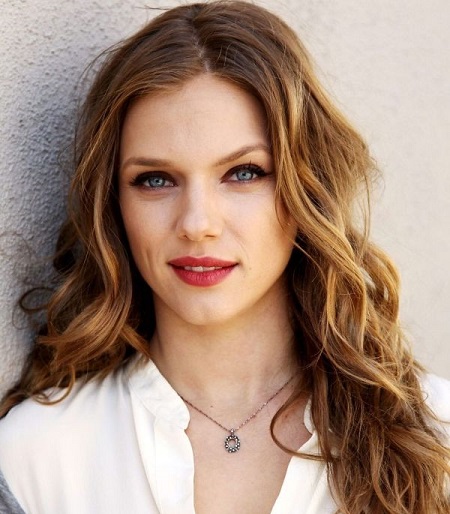 Tracy Spiridakos is a Canadian actress who gained worldwide popularity after portraying the character of Becky Richards on the Teletoon children's comedy show Majority Rules! from 2009 to 2010. Moreover, she is also famous when she acted on NBC's series Revolution from 2012 until 2014.

She was born on February 20, 1988, in Winnipeg, Canada. Her parents George and Anastasia Spiridakos are Greek-born who own a restaurant. Further, she has two brothers whose name remains private. As per her citizenship, she is Canadian and is of mixed ethnicity. She studied acting at Actors Training Centre of Manitoba.

Well, Aged 32, Tracy is yet to tie the knot with someone. But she is reportdely dating to her long term boyfriend Justin Ruane. He is a singer-songwriter and as well as a film producer.

Spiridakos and Ruane started dating in August 2014 as per Justin's Instagram post. Since then, the two frequently share each other pictures with mind-blowing captions on their respective social media accounts. More than Tracy, her beau Justin mostly posts their love journey photos on his IG wall.

So, now, it been almost six years that they are enjoying their love life without any complications. Hence, their long term romance has left most of their fans waiting for a big announcement from them. But to date, the pair have not mentioned when they are planning to get wedded.

Now, scrolling their IG accounts, the lovebirds often share their great moments together and are seen enjoying their vacation in different places. Currently, they reside in Chicago.

Besides her love life, she shares on-screen matchup with actress, Katie Cassidy in film Kill for Me in 2013.

Yes, Oak Park High School's graduated was previously engaged to her fiance, Jon Cor (born on November 17, 1984). After meeting on the set of The Boy She Met Online, the couple became engaged on 15th December 2012 after dating for few times.

Tracy who plays Detective Hailey Upton in Chicago Fire and Cor, 35, even worked together on Being Human. Similarly, they enjoyed some quality time together during their relationship.

But before saying Yes I Do they called off their engagement privately without disclosing their break up reason.

What is Tracy Spiridakos' Net Worth?

Tracy Spiridakos is an American actress who has an estimated net worth of $2 Million which is alike to Brittany Bristow and
Brooke D'Orsay. She has amassed her fortune throughout a decade of acting professional career. Well, she has made her TV debut by playing a small role in American dark fantasy television series, Supernatural in 2007.

Similarly, in 2011, Tracy performed the American science fiction action film, Rise of the Planet of the Apes. And the movie has grossed $481.8 million on the budget of $93 million. Her upcoming film is Byrd and the Bees.