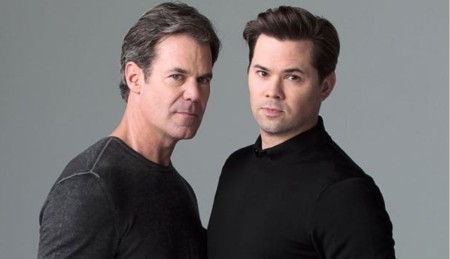 Black Monday actor, Tuc Watkins and his partner, Andrew Rannells are enjoying the blessing as being gay. It's something thankful and the happy part of life, in which two people who are the same genders came out to be a happy couple. So, Watkins and Rannells has also put their soul on the truth of being a gay couple and lives a fruitful life.

Former Retake actor, Watkins has won the hearts of millions with their incredible talent in the field of acting. So, does the couple won each other's heart after founding they're meant to be? Let's find more interesting things about the gay couple's dating life below.

American actors, Tuc and Andrew are carrying out their relationship romantically with showing compassion and love. The couple met for the first time in 2018 while portraying the broadway production of Boys in the Band. In the play, they played opposite roles of a gay couple, Hank and Larry.

After playing the opposite character in the musical, the two later became a real-life gay couple shortly after knowing they're made for each other. The couple then started dating secretly without telling about their relationship with their fans.

Fortunately, the pair later came out to be dating after revealing their mysterious affair in the public's eyes. Andrew first uploaded a picture through Instagram while swimming in a pool and enjoying their Sunday on September 16, 2019.

Following two days, Watkins even shared a picture while hugging Andrew on Instagram on 19th September 2019. In his Instagram post, he said, "it's hard to hide my partner, who's 6 feet 2 inches tall and shines bright as light."

The Perfect Match Came Out as Gay before Dating

Prior to dating, the couple first revealed they've opened their sexuality, where Andrew finds himself as gay while he was studying in high school. He then told his family when he was 18 and to his theatre friends of boys Catholic school.

On the other hand, Tuc also opened about his gender as gay during an interview with Marie Osmond on the Hallmark talk show, Marie on 29th April 2013. Since then, the gay partners has taken their secret out of the closet and live a happy life without any secrets.

Hollywood actors, Watkins and Rannells are currently working on their parenthood while raising their adorable twin children, Catchen Watkins, and Curtis Watkins, who were born on 16th December 2012. The birth of their twin kids was carried out by a surrogate, Melissa.

The lovely pair recently celebrated their children's 7th birthday on 16th December 2019. More to this, Rannell shared a picture via Instagram while taking The Polar Express tickets on Curtis and Catchen's birthday.

Watkins also shared a picture of their twin kids through Instagram on the same day in December 2019. In the Instagram post, Tuc wrote, "Notable at their school Christmas concert, Gwen & Gilbert Gillespie were signed by Atlantic Records, became known as The Chirps and toured Europe well into their 20s."

Just like the gay couple, Watkins and Rannells, some other celebrities, including Matt Nagy and his wife, Stacey Nagy are also taking care of their four lovely sons.