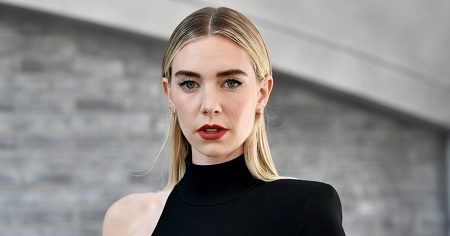 Vanessa Kirby is an award-winning stage actress who first came to prominence for portraying the roles in the romantic comedy film About Time (2013) and in the BBC adaptation of Great Expectations (2011). Also, she is best known for starring the main role Princess Margaret in the Netflix series The Crown from  2016 to 2017.

The actress was born on 18 April 1988 to the magazine's founder and editor, Jane and famous urologist, father Roger Kirby. In addition, she grew up alongside two siblings, Joe and Juliet, in Wimbledon, London. She is British as far as her citizenship is concerned, and has white ancestry.

The TV star who holds her education from Lady Eleanor Holles School has recently confirmed that she had broken up with actor, Callum Turner. Actually, the couple had been together from 2017 to 2020 but parted their ways after four years of dating.

On this early 2020 February last night, the couple called it quits. It's because their relationship had ‘suffered’ as a result of their careers ‘taking off’ as per The Sun. The rising stars gradually grew apart’, apparently, while spending long periods of time away from each other, working on different films.

Likewise, the screen beauty met actor Turner for the first met in 2014 while starring together in post-war British comedy flick Queen & Country. But they didn’t go public until 2017.

It's because some gossip merchants speculated she was dating her Mission: Impossible Co-star, Tom Cruise, 57. But the dating rumors of Vanessa and Tom went wrong in her own words.

How Much Net Worth Vanessa Kirby Does Holds?

Vanessa Kirby is an English actress who holds a $4 Million net worth as of early 2020. Likewise, she made this considerable amount of fortune throughout her acting debut appearing in many hits TV shows and films. Similarly, The Crown's co-stars Claire Foy also enjoys the same worth.

The 5 feet 5 inches tall actress is best recognized for playing Princess Margaret in the Netflix show The Crown by Peter Morgan. For this role, she received the 2018 BAFTA Award for Best Actress in a TV Series Supporting Role in season 2 and also nominated for the BAFTA award in 2017. She would, therefore, receive between $25,000 and $30,000 per episode.

Had Breakthrough Role in The Crown

In season 2, the Hollywood star played the main role of Princess Margaret in Netflix's first original British series, The Crown. And the same role was replaced by another actress, Helena Bonham Carter in season 3.

Similarly, Vanessa has had recurring roles in many TV shows like The Frankenstein Chronicles, The Hour, Great Expectations, and Labyrinth. Asides TV shows, she has appeared in many popular movies including The Rise, About Time, Queen & Country, Jupiter Ascending, Everest, Charlie Countryman, and Fast & Furious: Hobbs & Shaw.