Home gossip Where Is Demetria Obilor Today? Fact and Profile

Where Is Demetria Obilor Today? Fact and Profile 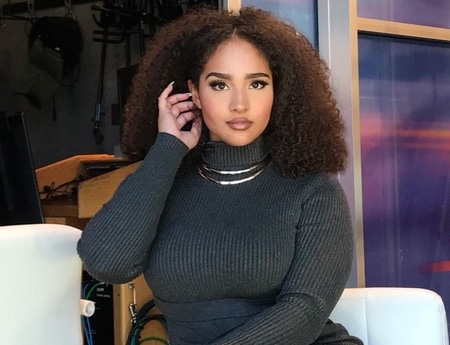 Even if you don't like to get an update about the city's traffic before moving out of the house, you might still know the name Demetria Obilor. The traffic anchor got viral after one of the viewer body shammed her via Twitter.

Despite all of those things, Obilor is finding so much success in her career. As of now, her annual salary is around $161,000 to $175,000, according to online reports. So, where is she working currently? Also, know some facts about her life.

After graduating from the University of Kansas in broadcast journalism, Demetria served at various news stations at the beginning of her career. Obilor worked in multiple positions, which helped her to gain a lot of experience.

The 27-year-old traffic reporter joined NBC in 2012, which marks the start of her on-air career. There at NBC, she joined the likes of Katy Blakey, Keisha Burns, and Kristen Welker to name a few.

At KSHB-TV, which is an affiliate of NBC, she got the opportunity to learn the job of production technician. After that, in 2013, Demetria found her mark as a traffic reporter. She served at the station for almost a year till 2014. She started providing traffic information to her viewers at WFAA, after her brief spell at KLAS-TV.

Obilor joined ABC affiliate WFAA in 2017, but recently in October 2019, Demetria refused to sign a new contract. After taking the network by storm upon arrival, Oblior left the news network, which she confirmed by posting a message on her Twitter. As of now, she is working at IAMUP talking about sports. We can see some of her hostings on her Twitter account.

She was Body-Shammed for her Dressing Style

In 2017, one of the viewers of the network, body-shammed Demetria, for her dressing style via her Twitter account. Obilor, however, handled the situation very well, which also made her very popular among the people.

The tweet complained about her wearing a size six dress while her body size is around 16/18. She clearly stated that Obilor is too big to wear that dress. Demetria, on the other hand, kept her calm and positively addressed her hater.

Obilor also thanked her hater for bringing her new fans and the channel viewers. In her response, Demetria addressed her body was built this way. The reporter also made sure to address the mean message that is spreading because of this to young girls.

Not just that, just a week before this incident, Kelly Clarkson also suffered from body-shaming, which is disheartening.

What is her Relationship Status?

Obilor is super pretty, and many guys who are viewing her every day on TV surely want to go on a date with her. As much as they want to take her on a date, they want to make sure that she is not in a relationship.

In the reply of her Tweet on January 20, 2017, she confirmed that she is single. Furthermore, Demetria also suggested that she is currently not looking for a partner as she is married to her work. But as she is now out of work, she might think about her relationship status too.