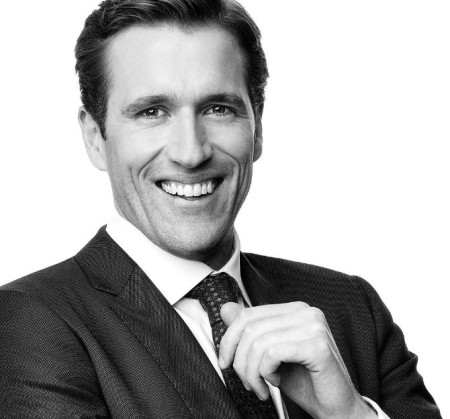 British journalist, Wilfred Frost came to prominence after joining the American pay business news channel, CNBC. He is also the co-host of the television news series, Worldwide Exchange. He recently featured as a guest correspondent in the news talk-show, Morning Joe, in 2018.

Frost was born as Wilfred Paradine Frost on 7th August 1985, in London, England, United Kingdom. Moreover, he was raised by Sir David Frost, a media personality and Lady, Carina Fitzalan-Howard, daughter of the Duke of Norfolk. Apart from this, is he single or not?

The prominent journalist, Wilfred, is currently single. Despite coming from a high-profile background, he prefers to keep his personal life close to himself and not to disclose in the media.

Frost further considers his relationship as single but, suppose to be a part of the fun of being in New York. He is also a hard-working and curious man whose goal is to become a successful person like his dad.

Frost's father, David, and his mom, Carina, walked down the aisle on 19th March 1983. At the event, they invited most of the royal guests like Margaret Thatcher, John Major, and Tony Blair, among others.

The married couple, moreover, shared three adorable sons from their marriage. They welcomed their oldest son, Miles Frost in 1984, in Westminster, London. Unfortunately, he died from hypertrophic cardiomyopathy on 19th July 2015. They later welcomed their second and third kids, Wilfred and George Frost.

Everything was going fine until his dad had heart attacks. Unfortunately, he died of a severe heart failure on 31st August 2013 while traveling in MS Queen Elizabeth ship at sea between England and Portugal. This incident ended their 36 years of a marital relationship.

Wilfred's dad, David Frost, was linked to a British actress, Janette Scott during the time of the 1960s. But, their relationship didn't last long because of some misunderstanding.

In the early 1970s, Frost began to date an American actress, Diahann Carroll. They further got engaged but, their engagement was called-off after Carroll found about his affair with British socialite, Caroline Cushing from 1972 to 1977.

After the separation, David met a promising and ascending British actress, Lynne Frederick in the late-1970s. The two, moreover, became united as husband and wife on 25th January 1981.

A year later, Lynne even pointed out that he had an 18-year intermittent relationship with an American actress, Carol Lynley. After all these issues, David and Lynne then divorced by the end of 1982, but they didn't share children from their marriage.

CNBC's news anchor, Wilfred, maintains a total fortune of $500 Thousand as of 2019. He makes a great amount from his career as a journalist. According to Glassdoor, a news anchor at the CNBC earns $68,563 as an annual salary.

Frost further co-hosts the television news series, Worldwide Exchange with Sara Eisen and Brian Sullivan. More to that, Eisen and Sullivan have a subsequent net value of $5 Million and $4 Million. Just like him, Richard Lui and Nicole Lapin also appeared on the show.

Once Lived In A Lavish Mansion

Wilfred's parents purchased a $5.2 Million accommodation, Michelmersh Court, located in the village of Michelmersh in Hampshire, southern England, in the 1980s. His father, however, sold his house for $5.84 Million, before his demise.

Their former home was built during the late 18th century and altered and designated on 29th May 1957. It consists on a 21-acre estate, which features seven bedrooms, six and a half bathroom, a typical fully designated center-hall, three fireplaces, and a swimming pool with a spa.

Following The Passion Of Journalism

After graduating from the University of Oxford, Wilfred started his career as an intern for Newton Investment Management, located in London, for the overall five years. He later attended a weekend-long media-training program and left his job to pursue his career in broadcasting.

Frost additionally got his first work as a news anchor for the business news program, Worldwide Exchange on CNBC in 2014. He also appeared as a guest correspondent in the news talk-show, Good Morning Britain in 2017.