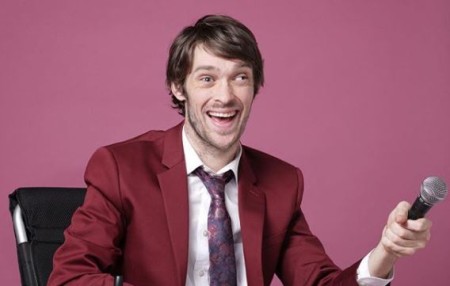 If you have a fierce determination, a positive attitude, and a correct mindset, even an impossible task seems to be a tiny entity. Likewise, Zach Anner, who was born with cerebral palsy, didn't let his condition from achieving success which normal people struggle to find.

If you don't know about Zach, then this article is a must-read item. Anner is an award-winning comedian, tv host, author, advocate and a public speaker. He first gained worldwide popularity after submitting a video to Oprah Winfrey's "Search for the Next TV Star" competition. Further, Zach won his own travel show called, "Rollin with Zach" on Oprah Winfrey Network.

The 35-year-old, Zach Anner is neither dating nor is he married. He was previously in a relationship with singer/musician, Gillian Grassie. However, it is not known when they began dating. Currently, the two are just good friends who travel and spend time with each other.

On March 28, 2015, the comedian posted a video (now-deleted) with the caption: "I did a Q&A with my girlfriend, Gillian Grassie! (told you she was real, guys)." Further, in a 2016 article published in AbilityMagazine, Zach mentioned he first met Gillian on Twitter.

Gillian, a writer and editor, collaborated with Zach for his memoir "If At Birth You Don’t Succeed." The book was published in 2016, and at the time, Grassie was living in Berlin. She is now Anner's primary writing and producing partner.

Gillian Grassie is an award-winning harpist/singer-songwriter. She is a touring artist who has lived on the East Coast, Europe and on the West Coast. Additionally, she has performed in France, Germany, India, China, Canada, Russia, Colombia, Peru, Ecuador and the U.S.

Together, Zach and Gillian have produced viral content for companies and organizations including Microsoft, Xbox, BraunAbility, Canine Companions for Independence, and the Cerebral Palsy Foundation.

There is no exact information about Zach Anner's net worth. He is a renowned author, comedian, public speaker, and host. Also, he is the co-founder of a company called "Lark the Beard Productions." As per sources, Anner might have an estimated net worth of around $300,000.

As per sources, Zach earns an average of over $65,000 per year from his several endeavours. His first won prize money of $100,000 after being a finalist on Oprah's show, Search for the Next TV Star. He was offered a show called, Rollin' With Zach, which was cancelled after only six episodes.

After Rollin With Zach, he created another show called, "Riding Shotgun with Zach Anner" with an association with Reddit.com. Further, in 2016, he published a memoir called, "If at Birth You Don't Succeed: My Adventures with Disaster and Destiny". The book received wide praise.

Apart from his own show, Zach has made multiple other television appearances including Rooster Teeth. He has also served as a guest actor, staff writer, and story editor for the ABC tv series, Speechless.

Zach Anner was born on November 17, 1984, in Buffalo, New York, the United States. His mother, Susan, a theatre professor, taught acting and playwright at the University of Buffalo. Likewise, his father worked as a bartender and videographer. Further, Zach has a brother named Brad Anner.

Due to his untimely birth, Zach was born with cerebral palsy. Despite his condition, Anner graduated from Kenmore West Senior High School. Similarly, he began attending college at the University of Texas, Austin, in 2005.