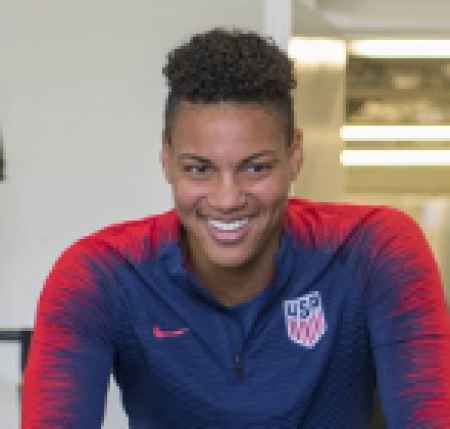 Who is Adrianna Franch?

Adrianna Franch is an American soccer goalkeeper for the United States women's soccer team. She also plays for the Portland Thorns FC.

Adrianna was born as Adrianna "A.D." Nichole Franch in Salina, Kansas, United States on November 12, 1990. She holds an American nationality and belongs to African-American ethnicity. Further, her birth sign is Scorpio. The information regarding her parents and two siblings are yet to be disclosed.

For her early education, Franch attended Salina High School. She started her football career in her high school playing with the students of her class. She played as a goalkeeper for three seasons, however, she could not play during her senior session due to injury. She had to drop her game for a long time.

After graduating from school, she enrolled at Oklahoma State University. Franch then became the most celebrated player after her Big12 tournament. She was twice named an All-American and semi-finalist for the MAC Hermann Trophy.

Adrianna created history in 2010 when she became the first Oklahoma State player to make it to the U.S. National Team. Apart from her national game, she played for the La Manga Tournament in Spain on March 2010 where she played against Norway and Germany scoring a win and a tie.

However, Franch shifted to Woman Soccer Team in 2015, she played 29 matches for the Portland Thorns FC winning the title of NWSL Goalkeeper of the Year award.

Is Adrianna Franch Married? Who Is Her Husband?

Adrianna is openly a lesbian. She is in a relationship with lesbian partner Emily Boscacci. The couple dated quite a long time knowing each other. Further, the lovers got engaged in 2018. The love birds have not yet divulged about their marriage life to the public.

Currently, the couple is enjoying their parenthood. Together, they are raising two children. However, the identity and further details about their children are not disclosed.

Besides, Adrianna has never been a part of rumors regarding relationship and affairs. Seems the couple is loyal to each other.

How Much Is Adrianna Franch's Net worth and Salary?

In consideration of her career, Adrianna has amassed a net worth around $1 million all through her career. She signed a contract worth  $421,550 with NWSL team which fetches up a good amount in between $16,538-$ 46,200 as salary.

In addition to that, a decade of experience in the soccer world is well enough for Adrianna to earn a salary above average. However, the income is based upon the player's ability, skills, achievement, and experience.

Moreover, she also earns a good amount of paycheque through her endorsements and productions. She flaunts a huge asset including a multi-million dollar mansion in her home town and some of the flashiest cars. She has a huge collection of converse shoes that she flaunts in her social media profile.

Likewise, she also spends quite a cash traveling along with her wife to some of the exotic destinations. Franch visits beaches with her partner, she finds it to be pleasurable. Recently, she visited Paris with her family.

Franch has a muscular buildup body. She has a height of over 5 feet 9 inches and weighs around 65 kg. In addition to that, she has beautiful black hair and a pair of hazel brown eyes.