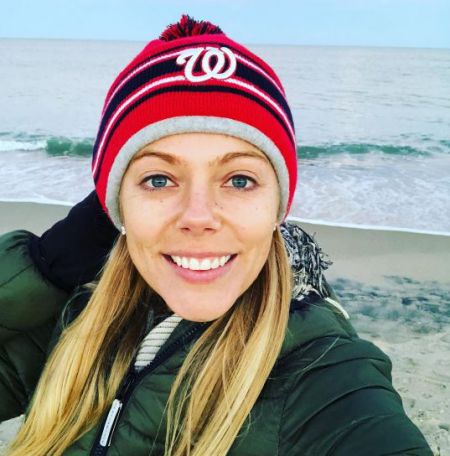 Who is Alexa Datt?

Many people dreamed of becoming host in the sports industry as the glamour and attention never ends in sports. very few people achieve their dream and the 32-year-old, Alexa Datt is one of the popular sportscaster who is at the top of her career.

The beautiful sports reporter, Alexa Datt currently works as MLB Network studio host who appears in various programs. She is the former host at Bleacher report and former segment host at SportsNet New York. One of the hottest broadcasters, Alexa broadcasting includes NBA, NFL, CFB, and MLB. ALso, she has hosted for the MLB.com's 12:25 Live with Alexa daily program.

From her career as MLB host, Alexa Datt earns an impressive salary and has a desirable net worth. A few sportscaster who has similar net worth are Dario Melendez and Levan Reid. Besides, she is also relishing her married life with longterm boyfriend, Peter Rosenberg. Her husband, Rosenberg is a radio disc jockey and former television show host for WWE.

Alexa Datt was born as Alexandra Brittany Datt on November 25, 1986, in Derwood, Maryland, the United States. As of 2019, Alexa's age is 32 years and her birth sign is Sagittarius. She regards her father, Douglas Datt as her role model and she equally appreciates her mother's value. She grew up with a younger brother named Conor Datt.

At present moment, Alexa Datt is famous for her role as a broadcaster for the MLB Network. She works for the regular studio show called The Rundown. She has co-hosted The Morning Run on 120 Sports.com, where she served as being in stadium host for New York Mets games at Citi Field. From 2009-2016, Alexa worked as the segment host/AP for the SNY (SportsNet New York).

Talking about Alexa Datt's marital status, she is a married woman. So, who is her husband? Well, Peter Rosenberg, a radio disc jockey and former WWE host is the husband of the MLB host, Alexa Datt.

The couple married on September 2, 2012, in a private wedding ceremony in front of their family, friends and relatives. As per sources, the couple exchanged their wedding vows in the east-central Montgomery County, Maryland.

The couple first met while they were students at the University of Maryland and after seven years of dating they finally married each other. Since then the husband-wife duo has been together as loving partners. As of 2019, they are married for over six years.

Alexa once revealed in an interview about how her husband proposed her. She said:

"On the Brooklyn Bridge at 11 am after tricking me into walking across it for a party at Grimaldi’s that doesn’t exist. We had a party of two at Grimaldi’s after I said yes.”

As of now, there are no news of separation and conflicts between the lovebirds. Till date, Alexa and Peter doesn't share a child. The partners now reside on the Upper West Side of Manhattan in New York City.

Alexa Datt Net Worth and Earnings

As of 2019, MLB host, Alexa Datt has a net worth of $1 Million. The average salary for a Major league Baseball network's reporters is around $74,500. Further, their yearly earnings rise up to $104,000. Well, sports presenter Sophia Minnaert also earns similarly.

Datt has earned a vast amount of wealth from her career as a host, broadcaster, sideline reporter, associate producer, and commentator. Therefore, we can say that she has a lavish lifestyle. Meanwhile, her spouse, Peter Rosenberg has a net worth of $600,000 as 2019.