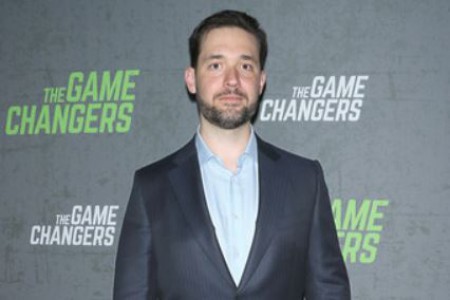 The 36-year-old, Alexis Ohanian is an American Internet entrepreneur and investor who is known as the co-founder and executive chairman of the social news website, 'Reddit.' He is also the co-founder of the early-stage venture capital firm, Initialized Capital.

The tech entrepreneur and best selling author, Alexis, was dubbed as the Mayor of the Internet. He is married to a professional tennis player and former world No.1 champion, Serena Williams. The couple is proud parents of a daughter named Alexis Olympia Ohanian Jr.

Millionaire Nerd And Tennis Legend: How They First Met?

The tech guru and the tennis legend first met in May 2015 at the Rome Cavalieri Hotel. During the time, Alexis was attending an internet conference, while Serena came there to play a tournament.

When Ohanian sat down at the table next to Williams', she and her friends tried to get him to leave by telling him there was a rat at this table. However, Alexis became hesitant to go, and Serena invited him to join her friends at the table.

Williams initiated the conversation asking him about his profession. She had never heard about Reddit before, and Ohanian had never watched Williams' match.

After their first meeting, Alexis was mesmerized by Serena's beauty and charm. Williams invited him to Paris to see her match at the French Open, and it was then the couple's first official date took place in June 2015.

They ended up walking around Paris for six hours before the tournament began, and later in September, Alexis did attend the US Open as well. Alexis often showed up in the stands to watch her play, but Williams initially kept low-profile.

In early 2016, Alexis decided that he would marry Williams. They became engaged on December 29, 2016, and welcomed their first child Alexis Olympia Ohanian Jr., on September 1, 2017, in West Palm Beach, Florida.

Alexis helped Williams realized that she could have a flourishing career, love, and motherhood. On November 16, 2017, the nerd entrepreneur and the greatest athlete exchanged their wedding vows in a star-studded wedding ceremony. Their marriage ceremony was held in the Contemporary Arts Center of New Orleans.

YouTube: A look inside Alexis Ohanian and Serena Williams' wedding!

The two chose the wedding venue and the date November 16 as their wedding date in memory of Alexis' mother who passed away nine years ago.

Serena wore a strapless, belted Sarah Burton for Alexander McQueen princess gown with a cape, sparkling with jewelry by XIV Karats worth $3.5 million in total. On the other hand, Alexis looked handsome in an Armani suit and seemed incredibly happy. Some of the celebrities' guests included Beyonce, Kelly Rowland, Kim Kardashian West, Anna Wintour, Ciara, and La La Anthony.

Although Alexis is married to Serena now, he had a relationship in the past. His girlfriend of five years was microbiology Ph.D. student Sabriya Stukes. The former couple first met at Ohanian's college dorm.

Sabriya randomly asked him about her friend, but Alexis was playing video games and didn't give much attention to her. And somehow that awkward encounter developed into long-term love. However, due to some personal differences, the couple broke up.

The 36-year-old, tech entrepreneur, Alexis Ohanian has a net worth of $9 million as of 2019. However, as per Forbes, Alexis' net worth is reported to be around $70 million. The primary source of his wealth came as an internet tycoon and venture capitalist. At the age of 22, Ohanian co-founded Reddit with his friend, Steve Huffman.

In 2006, their company was acquired by Conde Nast for an undisclosed amount between $10-$20 million. At the present moment, his creation is among the topmost visited website in the United States and is valued at over $2 billion.

Serena Williams, who has an estimated net worth of $225 million, makes her the only athlete on Forbes' list of America's Richest Self-Made Women. The 23-time Grand Slam champion earned $29.2 million, including $4.2 million in prize money in the year 2018.

Additionally, Serena has one of the most robust endorsement portfolios with sponsors, including Pampers, General Mills, Nike, Beats, JPMorgan Chase, etc. She is already planning to launch a clothing line, S by Serena, and aims to launch jewelry and beauty product lines by the end of 2020. For your information, Serena's older sister, Venus Williams, has a net worth of $95 million.

Inside Alexis And Serena's $6.7 Million Mansion

In October 2017, Alexis and Serena bought a lavish mansion in Beverly Hills for $6.7 million. The five-bedroom, seven-bathroom Spanish contemporary home has a spacious master bedroom, fireplace, game room, bar, and wine cellar, and many features.

Before moving to Beverly Hills, the couple listed their Bel-Air home for an original price of $12 million and sold for $8.1 million in 2019. Serena had bought the house back in 2006 for $6.62 million. There is no doubt that Ohanian and his star wife lives a lavish lifestyle.

The above article is about Alexis Ohanian, one of the co-founders of a popular social platform site, Reddit. To know about your favorite tech tycoon, follow marriedceleb.