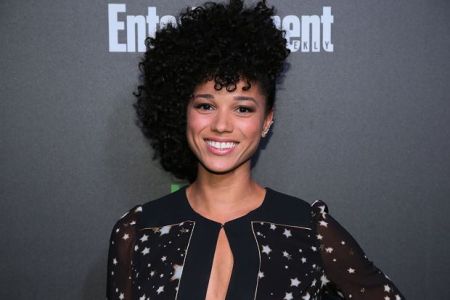 A girl with a strong perception, a woman with certain goals, and a lady with dignity are quite dangerous. Just like Alisha Wainwright, who believes that if someone makes a fool out of her, it doesn't take her out of class because she is too strong.

Born as Alisha Ena Wainwright, she came to attention for her prize-winning portrayal of Maia Roberts on Shadowhunters. So, is she dating a new boyfriend, or is she single? Let's what is going in Wainwright's personal life in the following sections.

Alisha's Parents are from Different Heritage!

The 30-year-old actress, Alisha is basically from Florida, United States, but her parents are from different countries. Her mother hails from Jamaica, and her father is from Haiti, so that Alisha's ethnic background is half-Jamaican and half-Haitian.

In an interview with CNTraveler, Wainwright said that she has the beautiful memories from her earliest travel. She spent her childhood in both countries, Jamaica and Haiti, where she found the Jamaican cultures are full of fresh fruit, and family with greenery with positivity.

Who is the Current Flame in Wainwright's Life?

Raising Dion star, Alisha is reportedly single, but she was found holding hands with "Mirrors" singer, Justin Timberlake, who is currently filming as her co-actor in Palmer. They spotted in a late-night bar in New Orleans at midnight, talking and enjoying their drinks in November 2019.

Many of their fans started questioning whether Justin is over Alisha while finding a new partner? But, it seems like he was heavily drunk and couldn't able to stand on his feet. Someone in the bar said that they were "smiling and laughing."

After the groveling nightmare, Justin apologized to his wife and children for his bad behavior. Alisha also regretted what she did with Justin. At last, they made a good lapse in judgment with lamenting their guilt via Instagram as well.

Alisha's Palmer co-star, Justin first dated his fellow cast member of The All-New Mickey Mouse Club, Britney Spears in the early-1999. The duo were high school sweethearts, who graduated from the University of Nebraska High School.

After staying in a relationship for more than two and a half years, the pair separated in March 2002. Timberlake then started dating British singer-songwriter, Emma Bunton for a brief time in 2003.

Justin shortly found a new partner, Cameron Diaz after meeting for the first time at the Nickelodeon Kids' Choice Awards in April 2003. The couple dated for overall three years and announced their separation in December 2006.

At the beginning of January 2007, Timberlake found his true love, Jessica Biel, an actress. They then engaged in December 2011 and tied the knot on 19th October 2012. They greeted their wedding guests at the Borgo Egnazia resort in Fasano, Italy.

Three years later, Justin and his wife, Biel welcomed a new member, a son, Silas Timberlake in their family on 11th April 2015. Since then, the couple is living a happy married life after celebrating their 7th marriage anniversary on 19th October 2019.

Similar to Alisha's Palmer co-star, Justin's love life with Jessica, some other celebrities like Katrina Sloane and Bard Merchant are also focusing in achieving the couple goals.