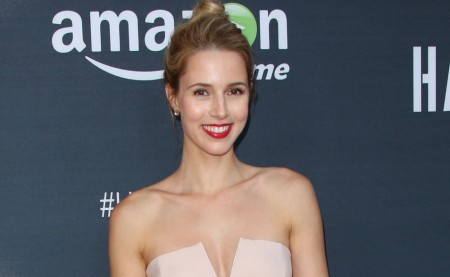 Israeli singer, Alona Tal is widely recognized for her song, Party to Damascus, where she sang the lyrics in Hebrew with an amazing tone. She is also best known for her role, Meg Manning in the mysterious comedy-drama series, Veronica Mars. She frequently appears on the Netflix mini-series, The Spy as Julia Schneider.

Alona was born on 20th October 1983 in Herzliya, Israel and hails from mixed ethnicity (Turkish and Polish). She is the daughter of Ami Tal (father) and Ayala Sabat, a lawyer, who were both born in Israel and raised in the Jewish faith. Aside from this, she is a married woman.

The 36-year-old actress, Alona is married to an actor, Marcos Ferraez on 23rd March 2005. The couple's marriage was a private ceremony held between their close relatives and friends.

The soulmates were dressed perfectly during the time of their nuptial, where Alona wore a white lace embroidery off the shoulder tulle gown. On the other side, Marcos was suited in a custom made black tuxedo, a white shirt tying up with a chocolatey white tie.

The pair are spreading love and joy in their blissful conjugal relationship from more than one and a half decades. The couple recently celebrated their 14th marriage anniversary on the 23rd March of 2019 and posted a glimpse of their wedding photo via Instagram.

Celebrated the Babyshower of Her Newly-Born Daughter

The former Israel Defense Forces officer, Tal announced that she and her husband are expecting their first child during an interview on the set of Supernatural on 23rd October 2016. The couple also celebrated the baby shower during Alona's natal period on 29th January 2017.

At the time of the baby shower, there were many notable and high-profile celebrities like Gal Gadot, Christy Carlson Romano, and Noa Tishby, among others. Four months later, Alona gave birth to a baby daughter, Charlie Ferraez on 7th March 2017.

Following the birth, the pair are happy and thankful due to the presence of their adorable daughter. Alona also posted a picture on Instagram while she and Marcos were kissing her child on both cheeks on 29th November 2019.

Net Worth Accumulated in Thousands of Dollars

Alona Tal's net worth is $600 Thousand as of 2020. She earns a handsome remuneration from her profession. Meanwhile, in the United States, a singer receives an annual salary of $41,751, which might be similar to Tal's yearly income.

On the other hand, Alona is starring in the television mini-series, The Spy alongside Waleed Zuaiter and Mourad Zaoui since 2019. The show is collecting high ratings with the help of Alona and other cast members that lists a Golden Globe Award recognition as well.

Grabbed the Limelight as an Actress

Israeli actress, Alona first served as an officer for the Israel Defence Forces, but she left the service after receiving an opportunity to sing in a music videotape. She later moved to New York City, where she met a Haitian rapper, Wyclef Jean and recorded the cover song, Party to Damascus in 2003.

Tal made her debut appearance as Shusha in a short film, Pim Pam Po In The Magic Castle in 2002. She then acted as Lilach in the musical comedy-drama movie, To Be a Star in 2003. She also starred in several TV shows, including Cold Case, Supernatural, and various others.