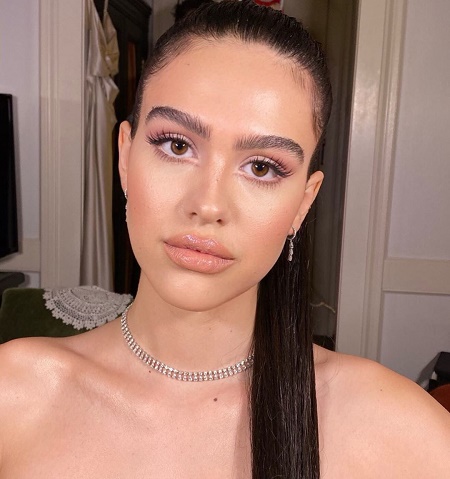 Amelia Gray Hamlin is an American model and Instagram sensation who initially fame due to her family members. Well, she is known as the daughter of the youngest child of American actress Lisa Rinna and her actor husband, Harry Hamlin. The two have been married since March 29, 1997.

She was born on 13 June 2001 in Los Angeles, California, United States. Further, she has one biological sister, Delilah Belle Hamlin, 22 and one-half brother, Dimitri Alexander Hamlin, 40, from her dad's past relationship with actress Ursula Andress. She is the grandchild of Chauncey Jerome Hamlin, Jr., Lois Rinna, Frank Rinna, and Bernice Hamlin. Her uncles are Clay Francis Lindus, David Gray Hamlin, and Louie Hamlin.

Is Amelia Dating Anyone Currently?

As of now, the Instagram sensation Hamlin, 19, is officially off the market. Yes, you have read it right. She is enjoying her love life with her current boyfriend whose name is Mercer Widerhorn who is also a model.

Now scrolling through their Instagram screens, it seems that this new cute couple has been dating each other since April 2019. For the first time, Amelia took a photo with her boyfriend, Mercer, at the club on April 14, 2019. Indeed, they celebrated their one year anniversary of love in early 2020.

Now, the lovebirds are very passionate and very much in love with each other. They often give a glimpse of their romantic dates or snap photographs on their respective Instagram page.

Besides her love life, Gray Hamlin shares a close bond with her beautiful mom. She and her oldest sister, Delilah, recently showed their best mom-inspired steps in a TikTok video on Mother's Day 2020 posted by Lisa.  The RHOBH star, 56, wrote: "Proud of my Mothering skills".

The Impressive Amount Of Net Worth

Working as a model, actress, and social media star, Amelia must be earning a good amount of money. Today, her net worth is estimated to be around $300 thousand, which she has acquired from her acting and modeling gigs.

Gray Hamlin, the 5′ 9′ tall has made appearances on the shows like The Real Housewives of Beverly Hills (2010), Harry Loves Lisa (2010), and Rachel & the TreeSchoolers (2012) along with her mother. So, she might have earned a good payroll from there.

Amelia and her sister, Delilah Belle launched a clothing line named DNA. It was launched in October 2019. Recently in 2020, the two sisters made their runway debut together for THE BLONDS Fall 2 show.

Now talking about her mother, Lisa Rinna's worth, it is roughly $10 million as of 2020. Her primary source of income is her thriving professional career as an actress, businesswoman, model, talk show host.

For her salary, she reportedly received $450,000 from her first season of Bravo's hit reality TV show, The Real Housewives of Beverly Hills. Not only this, but she has also made alone $2 million from a commercial for Depends adult diapers in 2015.

Whereas her dad, Harry Hamlin, aged 68, American actor, also shares a whopping value of $10 million. In addition, her stepmother Ursula Andress also has collected a hefty amount of fortune from her acting career as a Swiss-American actress. She has a net worth of $25 million as of 2020.