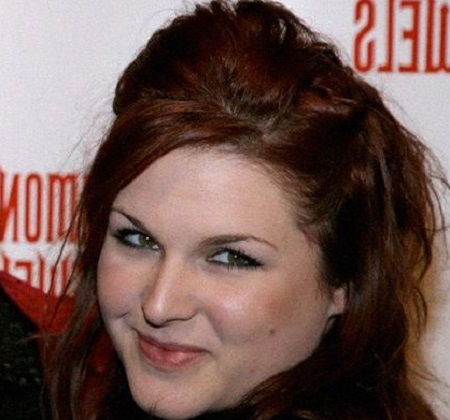 The former substitute school teacher, Amy Railsback is best recognized as the third wife of the famous American actor, comedian, and radio and TV personality, Danny Bonaduce. He came to limelight after starring on the 1970s TV sitcom The Partridge Family as Danny Partridge.

She was born on July 8, 1982, in Sacramento, California, the United States as Amy Marie Railsback. Because of her low key nature, there is no data about her parents or family background to the media. She is the daughter-in-law of Joseph Bonaduce and Betty Bonaduce.

How long Amy and Danny are Married?

And it's been a nearly one decade that this long term couple is living happily. The married twosome now shares a very strong and healthy marital bond without any problems.

38, Railsback, and her 23 years of senior husband, Bonaduce first met at a Starbucks in the Los Angeles area. Then in April 2007, they made their relationship public. Two years later, Dann proposed his girlfriend Amy in March 2009.

The love birds finally walked down the wedding aisle on November 22, 2010, at the Four Seasons on Maui, Hawaii. Since then, they have been enjoying each other accompany. For now, they maintain homes in both Los Angeles and Seattle.

She Is A Step Mother

Yes, you have read that correctly. Before Railsback, the former child actor-turned-radio personality was previously married for two times.

His first marriage was with Setsuko Hattori, whom he got hitched in 1985. They were in a happy conjual relationship in the early days. However, this connection never remained the same so they eventually divorced in 1988 after being together for three years.

After this heartbreak, Danny met his second wife, Gretchen Hillmer Bonaduce, 54, while working at an event sponsored by his radio show. And the day they met, they tied the knot on November 4, 1990, in the private ceremony.

Presently, the two share the custody of their son and daughter even after their divorce. Now, Gretchen Hillmer is engaged to her fiance Kevin Kautzky Starr, an American Drummer for about 11 years

Net Worth and Earning of Amy Railsback

Meanwhile, the exact net worth of Amy Railsback has not been disclosed anywhere. But, she manages her husband, Danny's career as she now runs Gravel Tones Productions Inc. Also, she can be seen on truTV's cable TV series The Smoking Gun Presents: World's Dumbest...

Whereas her spouse, Bonaduce has an estimated worth of $5 Million as of 2020. He has accumulated most of his fortune through his successful career of working in Hollywood. Apart from that, they listed a condo located on Hollywood for $1.05 million in March 2019. They had bought the apartment for $825,000 in 2007.

They also own a mansion in Los Feliz, California, which has at times been listed for $5 million. They bought that apartment for $2.6 million.