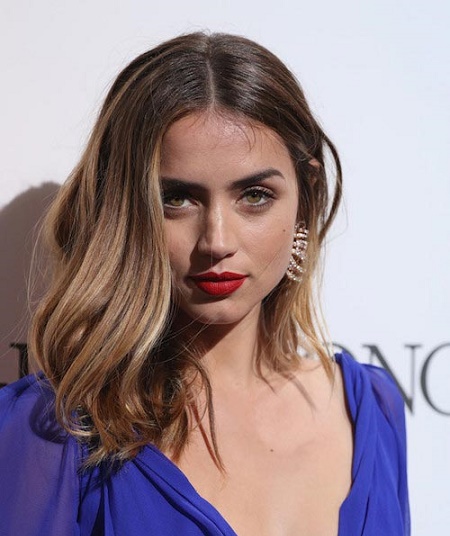 Ana de Armas is a Cuban actress who began her acting career as a teenager in her home country Cuba. She rose to fame with her role as Bel in film Knock Knock (2015) and as Joi in film Blade Runner 2049 (2019). Likewise, her first TV show role as Carolina Leal in the Spanish TV drama-thriller series El Internado, from 2007 to 2010.

Ana Celia de Armas Caso was born on 30 April 1988 in Santa Cruz del Norte, Cuba. Her mother Ana worked in the human resources section of the Ministry of Education while her dad Ramon is a bank manager. Further, she has one older brother, Javier, a New York-based photographer. So far, she holds dual Cuban and Spanish citizenship and is of white ethnicity.

She Is Now Dating To American actor, Ben Affleck

Yes, you read that correctly. Currently, Armas is enjoying her blissful love relationship with her new boyfriend, Ben Affleck, now 47 years. He is an American actor and filmmaker.

The new pair first met on the set of psychological thriller Deep Water in 2019 in New Orleans, Louisiana. They even played the married couple in the film where Ana played the role of Melinda Van Allen. Although they have not confirmed their relationship publicly, they are quarantining in Los Angeles together.

In March 2020, their dating rumors sparked when they were spotted in Cuba together. But US Weekly finally broke the news that they are happy together and officially dating on March 13, 2020. From there on, Ana and Ben are often stepped out together amid the novel coronavirus pandemic.

32, De Armas was once in a marital relationship with a Spanish actor, Marc Clotet, 40. The ex-spouses who started dating in June 2010 tied the wedding knot in July 2011 in the Costa Brava region of Spain.

But, they separated in February 2013 and filed for divorce after two years as husband and wife. They settled their divorce in the same year. Following the spilt, she was rumored to be dating a Venezuelan actor, Edgar Ramírez, 43.

In mid- 20-14,  Ana became engaged to Spanish director and screenwriter David Victori aged 37. They were together from 2015 until 2016. Also, she had a love affair with Cuban painter Alejandro Piñeiro Bello from 2017 to 2018.

As of early July 2020, Ana de Armas has a whopping net worth of $25 million. She has credited for her wealth to her entertainment career goes beyond acting for over one decade. Similarly, her salary might fall in the range of about $52,000, for her TV and film appearances.

Her recent film No Time to Die postponed worldwide due to the COVID-19 pandemic which was originally scheduled for release in April 2020. It was made on the budget of $250 million.