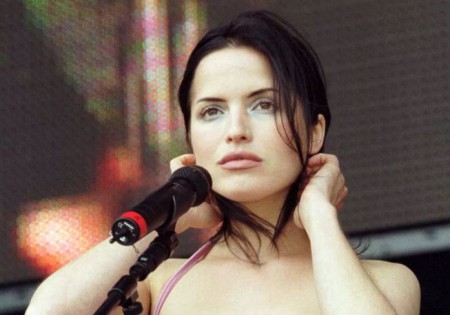 Who is Andrea Corr?

The 45-year-old, Andrea Corr is an Irish musician, songwriter, and actress. She is best known as the lead singer of the Celtic folk rock and pop rock group called The Corrs. Further, Andrea is also famous as the wife of Brett Desmond who is the son of billionaire Irish businessman, Dermot Desmond.

The lovely and talented personality, Andrea is involved in charitable activities. For their charity performances, The Corrs were made Honorary Members of the Order of the British Empire (MBE) in 2005 by Queen Elizabeth II.

Andrea was born as Andrea Jane Corr on May 17, 1974, in Dundalk, County Louth, Ireland. As of 2019, she is 45 years old and her birth sign is Taurus. Her father, Gerry Corr was the manager of the Irish Electricity Supply Board's payroll department. While, her mother Jean was a housewife. As a tribute to her father, Andrea will publish her memoir called Barefoot Pilgrimage in the coming October of 2019.

Andrea is the youngest of four children. She has three older siblings; sisters Caroline and Sharon and a brother named Jim. Their parents had their own band, Sound Affair. They used to play in local pubs in Dundalk where they would often bring along all four of their children.

In 1990, the Corr siblings former a quartet called The Corrs. The Corrs signed with Atlantic Records in 1995. Their debut album Forgiven, Not Forgotten reached platinum status and became one of the most popular debuts by an Irish groups.

As a solo artist, Andrea released her fist album, Ten Feet High on June 2007 which was produced by Nellee Hooper who has worked with Gwen Stefani and Madonna.

Similarly, Andrea entered the film  industry in 1991 with Alan Parker's film, The Commitments. She resumed her acting career in 2003 where she cast as Anne in The Boys from County Clare. She won the Film Discovery Jury Award fro Best Actress in the US Comedy Arts festival.

Talking about Andrea Corr's relationship status, she is a married woman. She has been married for over a decade with her longtime husband. The couple share two children. As of now, Corr is not involved in any controversies. She is happily releasing her married life.

Moreover, Corr was rumored to have hooked up with an English singer, songwriter and actor, Gavin Rossdale. However, there isn't additional details. For your information, Gavin is now dating model Natalie Golba and previously he dated German media personality, Sophia Thomalla.

Who is Andrea Corr's Husband? Wedding and Children

The 45-year-old singer and actress, Andrea Corr married Brett Desmond at St, Joseph's Church in Co Clare on August 21, 2009. She looked stunning in a strapless gown with an ivory bow. Their wedding was held in a lavish ceremony in front of family and friends.

Brett Desmond is an Irish stock broker who is the son of businessman and financier, Dermot Desmond. In June 2019, Brett stood for an election to the Canadian Miner's Board.

Further, in 2018, Dermot's net worth was estimated $2.2 billion and is one of the richest person of Ireland.

Andrea Corr, the lead singer of The Corrs has a net worth of $5 million as of 2019. She is a musician, songwriter, and actress and has been active in the entertainment industry for 29 years.

Throughout her career, Corr has received accolades and praise from critics as well as audiences. Likewise, she has also amassed a giant net worth and earnings.

The exact information about Corr's income and salary is not available. She hasn't revealed her income to the media and public. However, she might earn a desirable amount from her singing and acting career. Her most profitable movie to date is the 1996 film, Evita which collected over $141 million (equivalent to $225.25 million in 2019).

Andrea and her siblings have played charity concerts to raise money for several causes such as Freeman Hospital in Newcastle, the Omagh bombing's victims, etc.

They are also ambassadors for the Nelson Mandela's "46664" campaign. Along with her siblings, Andrea was appointed an honorary M.B.E. in 2005 by Queen Elizabeth for her contribution to music and charity.