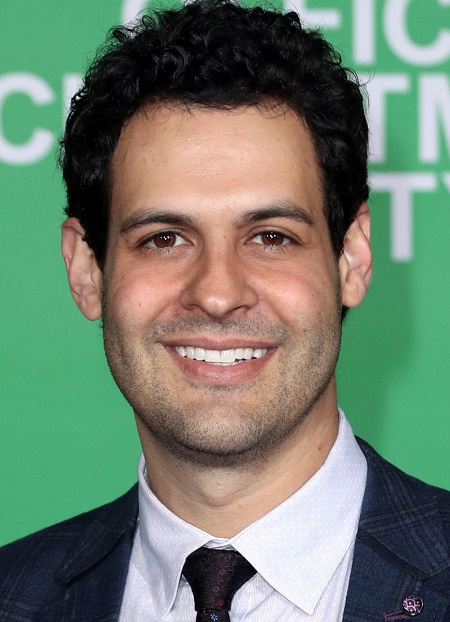 An American actor and writer, Andrew Leeds, best known for his portrayal of Josh on Cristela, Jackson Pulver on Veep and Christopher Pelant on Bones. Besides this, he became a member of the Main Company of the sketch comedy/improv troupe The Groundlings in November 2015.

Hollywood, actor Andrew was born in Clearwater, Florida, the United States on 24 September 1981. He spends his childhood with parents Kathy Lynn, Robert Gary Leeds, and Joanna Leeds, a younger sister. He is American by citizenship and is of white origin.

When it comes to his intimate life, Andrew is very concerned with keeping things a low profile. But often the graduate of Stanford University shares some glimpse of his personal life on social media pages.

Thus, as per his Instagram posts, the 6 feet 1-inch tall star might be secretly dating an American actress, model, and writer, Lindsey Kraft. Likewise, she is best known for playing Marguerite Macaw on Getting On, Allison on Grace and Frankie and Leslie Curry on Living Biblically.

When did Andrew and Kraft begin Dating?

Owing to their discreet existence, Leeds, 38 and Kraft, 37 have not revealed when and where they met the media. But following their social media, they seem to enjoy their love life for about 6 years without any signs of disagreements or problems.

However, they never spoke publicly about aspects of their relationship to the media, but they are still together. Back on May 23, 2014,  Andrew posted a black and white close image of them to Instagram back captioning "Billy Joel at the Bowl.

Henceforth, the two live a happy love life together. Plus, they often have seen going out together for dinner, cycling, movies and for traveling to new locations.

How Wealthy is Andrew Leeds?

Andrew Leeds is one of Hollywood's renowned actors; therefore his earnings and profits are desirable.  As of early 2020, he has an estimated net worth $1 million over a prosperous career working as an actor and writer.

Similarly, in the United States, the annual income of an actor is more than $50,000. So, his wages are certainly in the same range. As a comedian, he wrote a few comedy shows like Rex is Not Your Lawyer, Brenda Forever. Likewise, for the company of Kelly Ripa, his written series comedy pilot called Those People used.

To date, Andrew has worked on many shows including Desperate Housewives, Hot in Cleveland, Modern Family, The Morning Show, Cristela, and movies such as Entourage, and Major Payne. His film Office Christmas Party received $114.5 million on a budget of $45 million at the box office.

Who played the role of  David Clarke in Zoey's Extraordinary Playlist?

And actor, Leeds played the recurring part of David Clark, the elder brother of a Zoey and the show's public defender. Some of the show characters are Mary Steenburgen as Maggie Clarke, Lauren Graham as Joan, Alice Lee as Emily, India de Beaufort as Jessica and among others.