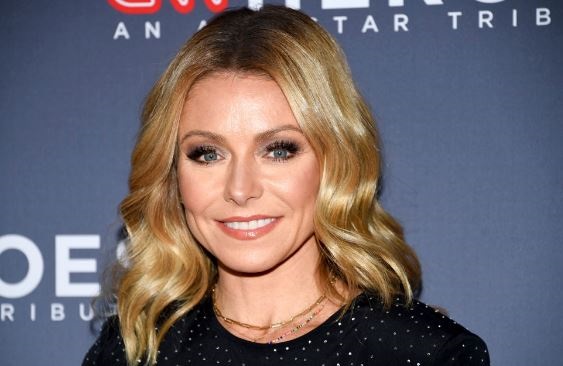 The beautiful personality Kelly Ripa is an American dancer, actress, television producer. Between 1990 to 2002, she portrayed herself as Hayley Vaughan on the ABC daytime soap opera, All My Children which lead her to gain a massive fan following and a huge success in later years.

Kelly was born on the 2nd of October 1970 in New Jersey, U.S.as Kelly Maria Ripa. She is the daughter of Joseph Ripa who was president of labor union and bus driver, and her mother Esther was a homemaker. She and her sister, Linda (children's book author) was raised Roman Catholic.

Ripa and her love life Mark Consuelos first met in 1995. The pair were co-star on All My Children and eventually started dating. The most amazing thing is, they were a couple on the All My Children where Kelly played as the character of Hayley Vaughan Santos while Mark played as the role of Mateo Santos.

After dating for almost a year, the couple was enjoying wine and pizza at Consuelos's apartment where Mark unexpectedly purposed her. After some weeks, the sweet couple shared their wedding vows in 1996. Though the pair have been married in the cast for a couple of times, their real marriage took place in beautiful Las Vegas.

Kelly Ripa and Mark Consuelos Are Now Married For 23 Years

Kelly and Mark have renowned as one of the hottest couples in the show business alongside that they are also known for their more than 2 decades long nuptial relationship. Their so much long marriage life still seems like a yesterday because the pair are often seen flirting each other in various TV shows and their social media account.

Mark even slams body shamers who criticized Kelly's bikini body where he state I love you keep killing it. Yeah! That's how you deal with your critics. The pair are so deep in love that they are often seen posting their photos on their social media handle and spending some quality time together.

Kelly and Mark share three children from their long marital relationship. The pair welcomed their first child after one year of their marriage in 1997 and named him as Michael Joseph Consuelos. Michael is an American actor; he came to limelight after portraying as Mike in the short comedy film, The Bensonhurst Spelling Bee.

After four years, the couple welcomed their 2nd child daughter Lola Grace in 2001. It was the same year Kelly joined Regis Philbin on Live. The 18 years old Lola has recently graduated from high school, and currently, she is attending the NYU Tisch School of Arts. Their 2nd son and third child, Joaquin Antonio Consuelos was born in 2003 which completes the fantastic family of four.

Busy Parents Are Still The Best!

Kelly and his husband are one of the busiest celebrities in the world but when it comes to their family the pair has a lot of time for them. The pair are often seen spending quality time with the kids and haven't left any things behind on growing them.

Furthermore, the family of five likely seen together in the awards shows and other events. Kelly sometimes lets her kids appear in her show. In November 2018, she led her son Joaquin to appear in her talk show Live with Kelly and Ryan.

The Net Worth Of Kelly Ripa

The 48 years old actress holds an impressive net value of $120 Million. From the starting of the career, she has been paid a good sum of money. Started as a TV actress, she has well experience in her bag. She has appeared in more than 10 TV series which are all one of the top TV series in history.

Since 2001, she has been hosting Live With Kelly and Ryan which is one of the most viewed shows on the planet. According to Forbes, she was making an $18 million salary from the show which was later expected to increase up to $20 to $22 Million in 2019.

She must be too blessed, isn't it? Being one of the well-known faces in the industry, she has been engaged in a lot of endorsement deals which include products like Tide, Colgate, Ancestry.com, Pantene, Electrolux, and many more. Concerning her dedication and experience, it is sure that she is being paid a good amount of remuneration from her deeds.

Kelly and her husband own many homes in the United States. Being one of the wealthiest celebrities in the world, the pair have invested their capital in various projects and houses. Back in 2014, the pair have sold their penthouse for $20 Million which is located in New York City.

They also bought the townhouse on East 76th Street for $27 Million from the Oluchi Onweagba and her fashion designer spouse, Luca Orlandi. That deal makes the second most expensive townhouse sold in NYC that following year. Currently, the family of five is residing in that place. According to The New York Daily News, the pair has also gorgeous summer home in Telluride, Colorado and also have a home in the Hamptons both houses are sure of Multi-Millions dollar.

How Rich Is Her Husband, Mark Consuelos?

Mark has an impressive net worth of $40 Million. Being one of the committed stars of Hollywood, he has been engaged in many movies and TV series from which he has gained a massive amount of remuneration. Furthermore, his starred movie in 2016 Nine Lives grossed $19,700,032 Domestically while it grossed $57,814,445 worldwide.

In 2014, his starred movie Cop Out collected the gross of $55,583,804 worldwide. Currently, the handsome hunk of Hollywood is working on TV series of Broad City as Brad, his experience and success towards jobs surely have to lead him to gain a good amount of fortune without a doubt.

At the beginning of her career, she has won the Best Actress Award at for her work in The Stand-In back in 1999. She is a five-time Soap Opera Digest Awards winner and has three Daytime Emmy Awards nominations in her bag for portraying as Hayley Vaughan on All My Children.

Her back to back outstanding performance leads her to be in Hall of Fame of The Broadcast Pioneers and also honored her as Person of the Year on November 19, 2010. Hollywood Chamber of Commerce honored her as the Hollywood Walk of Fame on 12th October 2015. Furthermore, she also broke the Guinness World Record as twenty-four banana-cream pies were tossed at her mouth in one minute on 15th September 2006.

She later broke another Guinness World Record for Most Grapes Trodden in a single minute as she extracted 8.4 liters of grapes juice, What? In Addition, she was honored by the Louisiana-based rock band by writing a song in a tribute entitled "Kelly Ripa" in their Fearless Album. She was also honored for New Jersey Hall of Fame back in 2017.

Dig in for more exciting Biographies and Gossips @ Married Celeb.