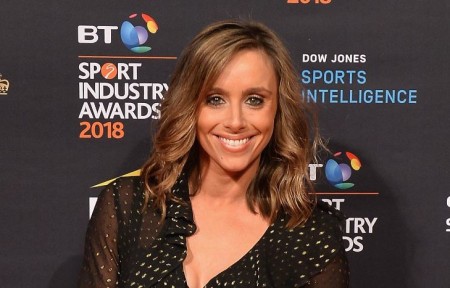 In the television industry, several women have made an astounding fortune from their professional careers. Similarly, Anna Woolhouse, a British journalist, is one of the established television personalities. She is currently the lead boxing presenter and is the most recognizable face of Sky Sports.

Anna was born on January 19, 1984, in Market Deeping, England. She is 36 years old as of 2020. Anna graduated with a BA Honors degree in Music and a post-graduate degree in Broadcast Journalism from Leeds University. During her teenage years, Anna was a junior exhibitioner at the Guildhall School of Music. Woolhouse had a brother named Harry Woolhouse who died in a bus crash in Malaysia in 2014.

The gorgeous lady is still unmarried, and it seems she is living a single life. Anna hasn't shared about her personal life in front of the public and media. Also, she doesn't reveal much on social media, which makes it difficult to assume her relationship status. It is almost that Woolhouse hasn't a boyfriend. Maybe she prefers to live her life as an independent woman. Like Anna, Katie Nolan is also a single woman.

Further, the information related to her past affairs and romance is behind the spotlight. It is just a matter of time when Anna will tie her wedding knot. We just have to wait until she introduces her future husband. Back n 2012, she mentioned spending valentine's day with a guy who seemed to be her possible boyfriend.

So after her professional work, how does Woolhouse enjoy her leisure time? If you go through her social media accounts, you can see her intense workout routines. Anna is a fitness enthusiast, and she mostly spends her time in the gym. Additionally, she likes to hang out with her friends and visits exotic places.

As a lead presenter of Sky Sports, Anna Woolhouse has amassed a net worth of around $300,000 as of 2020. She earns an annual salary of over $72,764, which is similar to another sports reporter, Holly Sonders.

The average salary of sports presenter ranges somewhere between $62,127-$93,298 per year. Apart from television, Woolhouse has worked in radio shows as well. Therefore, we can say that Anna has a desirable income.

Anna Woolhouse has earned a massive fan following over the past few years. She has hosted for Anthony Joshua’s fight against Alexander Povetkin and Joseph Parker. Further, she was the lead host for Sky Sports Boxing coverage of Conor McGregor vs. Floyd Mayweather in 2017.

Before covering Boxing, Woolhouse presented news on SkySports. She has also presented Ice Hockey and F1 shows. Some of her notable sporting credits include The Goodwood Festival of Speed, The British Basketball League, and Rugby League.

Likewise, Anna established herself in the world of Formula One with her own show on the Sky Sports F1 channel ‘Midweek Report’.

Trolled for her Fitness

There are different types of people on social media. While some groups follow and praise their favorite celebrities, some don't hesitate to pin down them. As mentioned, Anna is a fitness freak. She regularly posts her workout pictures on social media.

Anna has a stunning and ripped physique. Apparently, some Twitter and Instagram users verbally abused her for posting weightlifting videos. Likewise, the reporter claimed that she got death threats for just having a skinny body. Nevertheless, Woolhouse keeps a positive attitude, and to this date, she continues to inspire women.