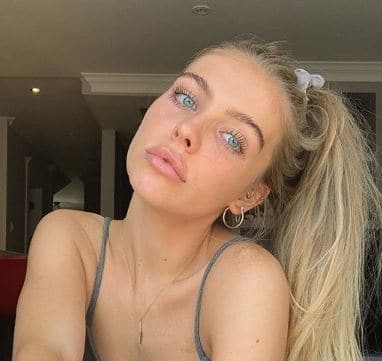 Instagram star, Annika Boron is one of the rising internet personalities. Having over 165,000 followers in her Instagram account, each and every of her post is liked by thousands of people from the world. Additionally, she is also equally active in the YouTube channel where she vlogs about her daily actives and other stuff.

Toronto based model, Annika is currently twenty-one years old. She was born in Toronto, Canada on 8th July 1998. In 2014 she uploaded her childhood photos for the first time since then there is no looking back for her. As of now, she is still active in her social site account and updates daily to her fans about her day.

Is Annika Boron involved in any relationship?

Yes, Annika has been in the dating game for quite a while. She has been dating a guy named Ben Kalifer. They two met one another in early 2019 and later exchanged the contacts. With lots of flirting and spending time together the couple started dating.

And soon they are bounded in a healthy relationship. The duo is often seen uploading one another's pictures in their respective sites. Where they are seen spending quality time together. And visiting and exploring different parts of the world.

They even are seen hanging out and partying with their mates and relatives in their free time together. It seems like they are enjoying their togetherness very much. Further, there is no news regarding pairs of external affairs and relationships as of now.

Twenty-one years old, Instagram queen, Annika has dated a lot of boys previously. But among them all, Kasperi Kapanen stands tall. Kasperi is a National Hockey player who plays for Toronto Maple Leaps. The ex-duo is known to be dating one another back from high school days.

However, their date of being in a relationship is still missing. Just after enjoying a couple of years of dating the pair finally called off their relationship back in 2018. Neither of the parties has confirmed about their reason for separation. They even have erases all of their traces from their social site account.

As of now, Annika is happy with her current boyfriend. While on the other hand, ice hockey star, Kapanen is dating another Instagram model Paige Lorenze. They two are known to be dating since starting of 2019. And are often seen uploading one another's pictures in their respective social sites account.

Annika Boron's net worth in Thousands

Instagram queen, Annika's net worth hasn't been officially confirmed yet. But her assumed total fortune is roughly about $300,000. Being one of the popular social sites influencers, her main source of income has been from the internet just like Sierra Egan and Venus Angelic.

Similarly, she is also frequently active in the modeling world. Recently, she has been involved in the fashion show week where she is seen ramp walking. But has ended her contract with her agency.

Further, her estimated annual income is between, $80,000 to $100,000. As of now, she is enjoying her life with boyfriend. And not to forget she is still young, wild and free and there are lots of surprises left for her in the near future.

For more biographies and gossips on a different artist, Visit married celeb