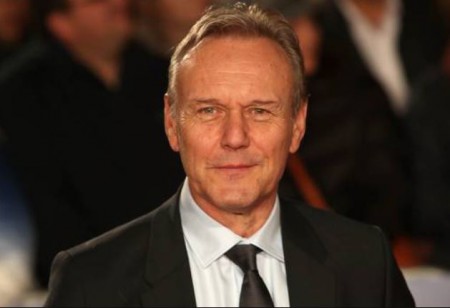 The 65-year-old Anthony Head is a renowned English actor and musician. He gained sudden fame after appearing in the Gold Blend couple television advertisements for Nescafe Gold Blend with actress, Sharon Maughan.

Further, Anthony is known for his roles as Rupert Giles in 'Buffy the Vampire Slayer,' Uther Pendragon in 'Merlin,' the Prime Minister in 'Little Britain' and as Herc Shipwright in BBC Radio 4's 'Cabin Pressure.'

The renowned television and film actor, Anthony Head, lives with his partner Sarah Fisher. They have been living together as partners since 1984, and Head often says that with Fisher, he has a life of unwedded joy.

Anthony himself is the most devoted of partners as he and Fisher have over three decades of togetherness without marriage. Head about his longtime partner said:

“She is a wonderful being and she made me who I am. She opened my eyes to so much of life and so much joy. She really makes me the best version of myself that I can be.”

With spending so much time together, Anthony and Sarah have still no interest in tying the knot. Despite not being married, Anthony considers himself to be married and admits he couldn't imagine his life without Sarah.

The old-time couple is proud parents of two lovely daughters, and both of them are actresses. Their eldest daughter, Emily Head, was born on December 15, 1988. Emily is best known for her breakout role as Carli D'Amato in the British tv series, The Inbetweeners.

Likewise, Head's second daughter, Daisy Head, was born on March 17, 1991. She is popular for her role as Amy Stevenson in BBC One's drama 'The Syndicate' and Grace in the American drama series, 'Guilt.'

Both Sarah and Anthony have been involved with the Battersea Dogs & Cats Home for more than 20 years. They are also the official ambassadors for the charity.

Further, Sarah has worked across all three of Battersea's centers in London, Old Windsor, and Brands Hatch in Kent. Also, she has trained many staff members in using the Tellington Touch (Ttouch) method of training to keep dogs calm and relaxed and has fostered several Battersea animals.

The popular actor and musician, Mr. Anthony Head, have a net worth of $3 Million as of 2019. The primary source of Anthony's income comes from his acting and singing career. His success on the stage and a few American television series such as 'VR.5,' bagged him the role of Rupert Giles in 'Buffy the Vampire Slayer' in 1997.

Apart from acting, Anthony sang with the band Red Box in the early 1980s. For his work in the film 'Despite the Falling Snow,' Head won the Best Supporting Actor award at the 2016 Prague Independent Film Festival.

Some of the movies in which Head had memorable roles have collected an impressive box office records. Here take a look:

Looking at Head's movies' box-office revenues, there is no doubt that he earns a lucrative amount of salary. Hence, he must be living a lavish lifestyle. Additionally, Anthony is among the most recognizable British actors.

To be familiar with your favorite star, follow marriedceleb.