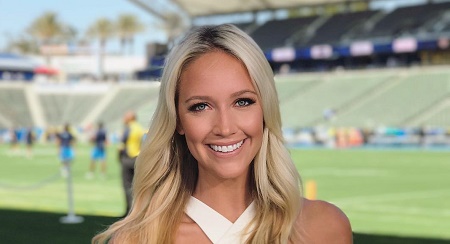 Ashley Brewer is an American Journalist and Sports Anchor, currently working as an ESPN Network sportscaster. She was a talented swimmer, who made it to the Olympic Trials (100-meter backstroke) before working in the world of broadcasting journalism.

Is Ashley Brewer in a Relationship with Anyone?

The stunning 28-year-old journalist is probably a single lady at the moment. She has spoken less about her intimate life when it comes to exposing to the public. So, until now, there is no accurate information on whether or not she is in a relationship with any possible partner.

However, Brewer who is 5 feet 10 inches tall often posts the cozy pictures with several guys on her social platforms. On August 10, 2019, she posted the romantic date photo with an Ice hockey defenceman named Hampus Lindholm in her Instagram wall at Hotel Santa Caterina, Amalfi.  She even wrote a sweet caption "Best summer yet" with a love emoji.

On the other hand, 26, Lindholm also wished Ashely on her 28th birthday wearing a matching white dress with the caption "Happy Birthday to this amazing girl♥. But until today, the two have never mentioned each other as a girlfriend or boyfriend. So, we can assume that they are nothing more than good friends.

Nevertheless, Ashley once stated in September 2018 that she had an ex-boyfriend on her Twitter. But there are no clues about her past love affairs to the press as she kept them under the wraps. She previously posted a picture with LA Kings' lion mascot and wished her followers Valentine's Day in 2018. But, Ashley turned out to be only a huge fan of the hockey team.

Working in the journalism sector for a long time, Ashley Brewer makes a suitable amount of fortune. As of early 2020, she has an estimated net worth of $1 million, which is alike to Erica Collura, and Leslie Lopez. She has accumulated her significant income through her successful broadcasting work.

During her career, she's also worked for TV networks like ABC7 Eyewitness News, KGUN-9, etc. Currently, she serves as lead sports anchor and reporter for the ABC LA sports division. Thus her compensation is expected to be $56,000 per annum.

During her time in Texas, she 'd spent her first two years swimming so she might be paid off decent amount from there. Likewise, she played in three Pac-12 championship events in 2013.

After graduating from the USC, Brewer was chosen to make a college football sideline reporter for Cox 7 Arizona. She then became KGUN-TV 's weekend sports anchor, in Tucson, Arizona.

Before being hired by ESPN, Ashley was the weekend sports anchor and reporter at KABC-TV in Los Angeles. She was a part of the broadcast team on American Broadcasting Company's The Bachelor Winter Games show before joining ESPN.

The TV reporter is the middle child of five siblings in her family. Her mother Deborah Pyburn Brewer is a retired journalist who served for Phoenix CBS as a news anchor for nearly one decade. Similarly, her oldest brother Charles Brewer is a former right-handed pitcher for the Arizona Diamondbacks.