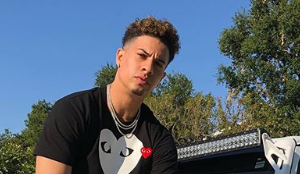 Austin McBroom is a famous internet celebrity who is famous for YouTube channel ACE Family where he made a video with his family. Besides his recent fame played on the state championship team for the Vikings. He is also been to NBA in 2015 to 2016. He was a running back on the football team and played shortstop on the baseball squad.

Born May 20, 1992, in North Hollywood, California. He has completed his high school from Saint Louis University. Furthermore, he completed his graduation from Campbell Hall majoring in Mass communication.

Former basketball player and YouTuber Austin has exchanged his wedding vows with his long time girlfriend Catherine Paiz. His spouse, Catherine is a Los Angeles based French-Canadian model, actress and social media star who had modeled for Azzelia Swimwear and Rali Ivanova in 2013.

Their millions of followers got the news of their marriage when Ace family posted a video on YouTube titled “WE GOT MARRIED … (THE TRUTH)” on January 18.

On that specific video, they explained that they have been married two years ago under very casual circumstances. They have also rev lead that even their parents weren't at their nuptials.

Catherine and Austin became engaged. In February 2018 and just to prove they have been married for a little while, the romantic couple shared a picture showing off a photo from the day they tied the knot where they could be seen standing by the pool, holding hands as the sunset.

Both of them were in shorts and T-shirts, which, honestly, looked like a pretty cute move all things considered. However, they have also confirmed that they will again get married in a traditional way.

Cathrine and Austin seem to be desperate for actual marriage but so far their wedding date and the venue has not been disclosed yet. Wanna know more about their love story, keep scrolling.

How Did They Meet

Catherine Paiz met Austin McBroom formally at an event in 2015, although they knew each other for a number of years while both of them were attending St. Louis University. He sent her massage but she almost replied a month later. later on, Austin invited her out for a dinner and she did accept his invitation.

She asked him to accompany her on hiking after that the two began dating.  After that Austin went to East Washington University and maintained their relationship even he transferred there. Just Scroll down to know about their children.

Although the Ace family seems to look young it is true that they are the parents of three children. His partner got an unexpected pregnancy with his first child while they were college students but they planned to have a child.

Recently, Austin has shared a picture where he is spotted hugging his wife which seems to pregnant. We can assume that currently, the ACE family is planning to have a third child. Now let's scroll down to find out their net worth.

How Much ACE Family Worth?

Former NCAA basketball guard has an estimated net worth of around $3 million.  Through his YouTube channel ACE Family he must be earning millions of dollars for having more than 13 million subscribers as per 2020, similarly like another YouTube celebrity Lizzy Sharer.

Besides their huge expense on the house, they had also poured a great amount of money in branded cars. Austin owns Rolls Royce phantom which almost cost him half a million dollars.